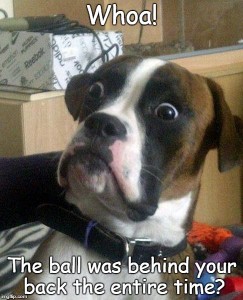 Saved from imgflip.com from the Surprise Meme Generator.

Chris & Kevin are back after an off week. How did the big surprise of the show, the Shane McMahon reveal, work in person for Chris? How many different lines of speculation can you go through with the revelation that Shane will be taking on the Undertaker? Will he actually have the match or will John Cena make a miraculous comeback and be Shane’s proxy. If Shane wins, will real changes take place to the style of Raw? Is it time for Raw to be governed by a babyface who doesn’t screw over the heels? Think Nigel McGuinness in Ring of Honor. Chris & Kevin eventually move into talking about Dean Ambrose taking on Brock Lesnar? Will the WWE separate the weapons used in the Hell In A Cell and this street fight? Does Ambrose have a choice in selling with the way Brock tosses him around? Who will be looking forward to the War of Words between Ambrose and Paul Heyman? The last of the big three matches is HHH vs Roman Reigns. Why is anyone surprised by Reigns being in the main event? What story does Chris share that may weigh on the WWE’s mind when keeping Reigns in the main event despite the boos? Do the people cheering HHH realize that he is doing what he can to put over Reigns despite their wishes? Does it matter that HHH was playing to the crowd during his beating of Reigns on Raw? The only other match that seems to be a lock is Becky Lynch vs Sasha Banks vs Charlotte? Is there a chance Lynch gets bumped out? Don’t they all deserve to have a match at Wrestlemania? What will New Day be doing come WM? Will Goldust & R Truth come together? Any chance that AJ Styles & Chris Jericho stay together to fight New Day? Why didn’t Kevin Owens come out for Raw? What will Kalisto be doing? The guys wrap up with the Sippy Time Beer of the Night and a story from Against the Grain Brewing in Louisville KY? Will our friend Steve supply us answers? What shirt was Kevin wearing to get this story out of the sales rep for ATGB? Find out by clicking the link below!