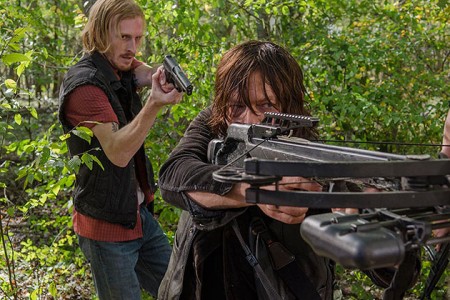 Kevin: So, is it time to get started to talk about The Walking Dead? And I feel like it’s a good idea to note that we will be missing the season finale because of Wrestlemania to start this conversation.

Jeremy: I am bummed we will miss it. Wonder if there is a way to bring a VCR with us to record AMC so we can watch it after? A VCR is an older tech device used to play and record video.  Going to be rough staying off Facebook and Twitter til we get home Monday.

Kevin: I don’t have anyone ruin anything for me on either of those mediums so I’ll be okay. It is a bit annoying not to get to see the big 90 minute wrap up.

Jeremy: We have waited patiently all season for Negan and when he finally shows up, gotta wait a day later. Guess when I put it out there like that it isn’t so bad.

Kevin: No, not even a little bit. I thought this lead up to the finale was a very high paced show. The episode felt like it flew by.

Jeremy: Yes it did fly by even though not much happened until the end. It served a purpose though as it spread the group out a bit. Shows Alexandria is a bit weaker with some of the big guns not around.

Kevin: All of the big guns were acting like a bunch of idiots too. They did make it known though that Alexandria was going to be weak, from the top of the show.

Jeremy: Everyone acted really stupid last night. What;s the point of the watch if someone walks up to the fence and just opens it? Then they all go chasing after Daryl and Carol in separate cars/groups.

Kevin: Even if they had all taken a little more time to get organized, it would have felt better. But both of the events seemed separate so I can understand why it happened the way that it did.

Jeremy: Oh for sure. Daryl had no plan at all right? Just running off to find Dwight and the Saviors. Or did he got to bury Denise? I figured she was food already. Either way pretty stupid. All he is going to get for it is a bullet to the shoulder and his friends held captive.

Kevin: Daryl didn’t seem to have a plan. Even if Dwight wasn’t with the Saviors, why did he think going 1 on 12 was a good plan? That little group even got the level headed speech from Glenn to get everyone back to Alexandria and they all said “Fuck it, we’re dumber than you Glenn. We want to get shoot, captured or both.”

Jeremy: So his plan was to go to the tracks and then he’d find them. I understand Daryl is a tracker but still really dumb. Blowing off Glenn, nudge, is going to cost them all. Over the last few shows , and delving in to the relationships, it has helped make all of them a bit more human. So , I suppose we should excuse his anger that lead to this stupidity?

Kevin: If they knocked off someone closer to Daryl, I might understand the reaction but it was Denise who he got to know for the supply run, sort of. I know the connection was made a while ago but having Aaron die at the hands of Dwight would have pulled at Daryl’s heart strings more.

Jeremy: Ahh good point. His anger is understandable since he believes he should have just killed them and he isn’t wrong in hindsight. I did appreciate Glenna and Michonne giving up so easily. They have been around enough people snapping to know when the argument falls on deaf ears.

Kevin: Plus, they have always seemed to get the upper hand in these types of situations. Hard not to get a little cocky about being in control, even when you’re not.

Jeremy: OK that was a pretty big there as well. Rick and Michonne’s conversation in bed and eating the apple. Rick is awful confident of himself and the group. much too confident seeing who they know another fight is coming. I believe the bible verse is about hubris as well. So, seems to be some easy foreshadowing bad things are a comin’.

Kevin: Ugh, have I mentioned I hate AMC for scenes like the one in bed. Their sound comes in so much lower than every other station. Not that I shouldn’t have thought about the apple analogy but it may have helped hearing more of that scene.

Jeremy: He basically said this is their life and they have to take it. it showed complacency and a bit of arrogance. You would think after losing Denise out of the blue a little bit of paranoia or humility would set in. it seems like Rick is fine with the fight and the loss of people it will incur.

Kevin: Abraham seemed ready for it too. Maybe they think even less of death since they had to deal with it before the zombie apocalypse.
Jeremy: Abraham is a different egg than Rick though. He has seemingly been a fighter the entire time. He has the hope Rick does for a better future with Sasha now and he will fight. Rick , as the leader, is just saying to hell with it they die they die. I haven;t gotten the sense Rick is thinking ahead in the sense of the losses.
Kevin: I can agree with that line of thinking. Rick was the only one smart enough though to heed some sage advice from Morgan. Just go back to Alexandria and make sure everyone is safe.
Jeremy: So was that a goodbye? Morgan joining up with the group has been a disappointment and not sure where to go from there with him. Him leaving to go find Carol and telling Rick not to come look for him seemed like the end for them. Rick also admitting Michonne ate his protein bar was what did it for me.
Kevin: For as much as Morgan could have brought for being the voice of non-violence, it was clear that non-violence won’t be the path most choose at this time. The show has proven that time and time again. I do think it’s the end of Morgan even if he talks Carol into going back to the Group.
Jeremy: Right I can’t imagine him just walking away so figure someone or something kills him. I would like it if he did just walk away though. Fans would go nuts every year waiting for his return but just never have it happen.
Kevin: I would hope much like you suggest, we get some type of closing other than what we got last night. If we don’t, no skin off my back.
Jeremy: Morgan becomes expendable if Carol follows his path but from what we got last night she is only going to kill to protect herself? has she morphed the two philosophies.
Kevin: It’s possible to do so if you are out just for yourself. It becomes harder when you believe you are protecting other people. I was wondering though if Carol was out to just take down more Saviors because of her, not all that bad treatment at their hands.
Jeremy: Sure seemed like she was destined for some abuse form that group. They knew where she was form so she was going to be used or possible abused to get somewhere with her. I can see protecting yourself but she was asked to go on runs and kill when there was possibly other alternatives.
Kevin: Okay, the later part of your response is what is getting me. Are you saying Carol has good reason to leave because she had to do stuff she didn’t want to with the main Group? Or are you saying she would have been forced to do it by the Saviors?
Jeremy: Last night she was backed in to a corner and had to defend herself. She didn’t like it but she is also a self preservationist. I think that was the point of her note. She said you will ask me to kill for you and I won’t. Just a thought really and not one too fleshed out. Just seems to be the case.
Kevin: I got you. That could be the case. Her taking out another 6-8 people from the Saviors makes me go back to another question from last week, how many people do they have in this group? They have faced major casualties and there’s still more of them out there. Why didn’t they pick on Alexandria before now? Because the show last night made it abundantly clear that Alexandria has been on their radar for a while.
Jeremy: I didn’t think it had been on the radar for a while but just that they knew of it. They may have discovered it recently. They also haven;t brought up the Hilltop community since they went there so maybe they ratted them out? Rick did say last night that things aren’t over with them at least. Did anyone really think that was the Saviors only compound? If they are that scary and intimidating there has to be a lot of them.

Kevin: They did bring up Hilltop a few times last night actually. Because they mentioned the Saviors using weapons supplied by Hilltop. I still don’t think they’ve done a good job of establishing how big and scary the Saviors are. A few run ins aside, I need more than Hilltop vouching for their bad assery to believe. Another community chiming in. Maybe had the Wolves complained about them. Something more.
Jeremy: I meant they haven’t shown them on the show at all. Been a rough go of it today getting my thoughts to the keyboard. I would think the sheer amount of Saviors they have come across and slaughtered would be an indication they have a large force. They knocked out an entire compound, then some stragglers, then the women and the search party, now the guys on the road. They keep coming.
Kevin: Ha. No problem. It almost doesn’t seem like a “fair” fight with Rick & Company then. They have still done nothing to flesh out Alexandria in the mean time other than Rick saying that they were ready to go to war now. Do we have any idea how many people are in Alexandria, yet?
Jeremy: There are exactly as many as they need for any given show.  Well, minus two with Tara and Heath being gone for “2 weeks.”
Kevin: Carol & Maggie were able to wiggle out of their situation pretty much on their own. I’m taking a wild guess that Daryl, Rosita, Glenn & Michonne won’t be so lucky.
Jeremy: Yeah no man, last night started the eventual bad I was commenting on. Plus the bad started when Maggie’s zombie fetus started clawing its way out. At least I hope that is whats happening.
Kevin: I was going to forget to bring that up. If her baby is zombie, it’ll be an awesome moment. Have it pop thru her stomach still eating the placenta similar to an Alien gestating.
Tweet