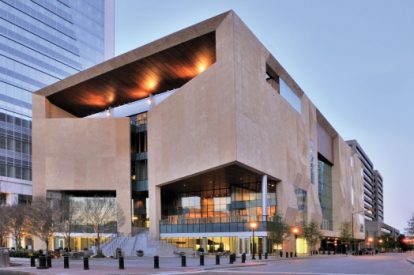 The Mint Museum Uptown in Charlotte NC was designed by Machado & Silvette and Associates. Saved from mintmuseum.org

The WWE starts us off with a video package recapping the main event. That then leads to Chris Jericho‘s Highlight Reel which has special guest Kevin Owens again. They make fun of Thanksgiving then say what they are thankful for. Roman Reigns interrupts the party. He points out the obvious that Owens needs help all of the time to win. I enjoyed the line from Reigns saying that he doesn’t want “Joke Owens Joke” but “Fight Owens Fight.” Reigns talks himself into a match that will get him a shot at the Universal Championship at Roadblock.

Owens and Jericho get in another argument. I feel like they’ve broken up more than Ross & Rachel. Mick Foley makes an appearance for reasons unknown to me. Jericho voluntarily “leaves” again. How many times can the same segment be done?

R Truth is taking on Braun Strowman. Running power slam for the win. Goldust comes in to look after his partner. Goldust ends up locked in the modified bear hug he has used before. Sami Zayn tries to make the save but gets stopped with an Eliminator. After the break, Zayn is mad at Foley because he keeps getting his ass kicked. The conversation goes in much that direction.

Charlotte is back stage when Dana Brooke arrives. Brooke is arranging a celebration for her homecoming. I couldn’t be less interested in these segments so far.

Cedric Alexander is taking on Tony Nese. The Cruiser Weights finally get a singles match on Raw that isn’t a championship match. Alicia Fox is fawning over Alexander back stage. Alexander is getting a solid reaction in his home town too. Drew Gulak jumps on the apron. Alexander takes him out. Nese takes advantage with a Pump Handle Power Bomb for the win.

Recap city because so much went on in the first hour. A serious level of sarcasm was used in that line.  Chris Jericho tells us this isn’t a “joke” like last week. No one still believes him. Seth Rollins jumps Jericho who was Jericho’s “driver.” Jericho gets Pedigreed on the top of a car.

Sasha Banks takes on Charlotte again. Dana Brooke is at ring side. Sasha tosses Brooke into the stairs after an early Bank Statement attempt. Charlotte is having an awfully hard time tossing Banks against the barrier. The match is a double count out.  Knowing how this feud has been going, why didn’t this match stipulations before now? So the WWE is so desperate for air time that they’re going to have this match on the show twice. Wow.

Enzo Amore (with Big Cass) is taking on Rusev (with Lana) again because I’m assuming Mick Foley thought Amore took less of an ass kicking than Sami Zayn? Enzo Amore continues down the “Lana loves him” alley while Big Cass tells us what most Americans eat for Thanksgiving. Enzo wins the match when Rusev kicks his family jewels.

Mark Henry even gets to have his ass kicked in the movies. Titus O’Neil feels like Henry stole the role from him. Henry finds this idea as amusing as I do.

Brian Kendrick is on the head set while Rich Swann battles Noam Dar. Dar takes out Swann’s feet for the first big move of the match. Swann rolls through on a pin attempt and kicks Dar in the head. Swann connects with a Swinging Super Kick for the win. The action was on the head set more than it was on in the ring. Swann grabs the mic from Graves. Swann thinks Kendrick is doubting himself since Swann has beaten him twice already. Something didn’t quite sit right with me during that promo.

Sheamus is in a bar drinking a beer. Cesaro joins him and order a martini that has as many olives as an olive bar. The jerks in Charlotte start picking on them so they kick everyone’s ass in the bar except for the ladies.

Kevin Owens berates the new interviewer whose name has escaped my ears. Owens says that he lost because of his concern for Jericho. Ha.

Michael Cole had a sit down interview with Paul Heyman. Of course we needed a video package first. Heyman says that we screwed up. They took Goldberg too lightly. The Spear cracked Brock’s ribs. The loss is embarrassing. Brock feels like he has something to prove. Not surprisingly, Lesnar is going to prove himself at the Royal Rumble since Goldberg entered.

Corey Graves is still tired of New Day‘s schtick. Too bad that you’ve got another three weeks. They’re making it to Columbus with the straps. Luke Gallows & Karl Anderson are their opponents this week. Big E gets a hot tag and cleans house. A Sick Kick gets a two count for Anderson. Big E hits the Spear to the outside. Anderson breaks up a Big Ending attempt. Woods is back in to take a beating again. Woods kicks out after a Super Neck Breaker. Big E breaks up a Magic Killer but gets power bombed. Woods fires off a fore arms. Anderson rolls up Woods and grabs the tights. Woods reverses and grabs the tights for the win.

Bayley comes to Sasha’s locker room and tries to give her a pep talk. Sasha is all about the Women’s Championship and Charlotte’s disrespect of the title and her own father.

Sasha Banks and Charlotte are in the main event again.They are really getting after each other on the apron. Sasha gets kicked back first onto the apron. Charlotte connects with Natural Selection on the outside. Sasha snags a kendo stick from under the ring and starts wailing on Charlotte. Banks takes a neck break from Charlotte. Figure 8 by Charlotte on the outside. Banks cracks Charlotte with the kendo stick to break the submission. They battle up the ramp. Charlotte nails a moonsault off the announce table onto the floor. Sasha slips out of a power slam spot and drives Charlotte into the post. Sasha drops the double knees off the barricade. Charlotte & Sasha start fighting thru the crowd. Sasha puts Charlotte thru the guard rail up the stairs. Sasha knees her repeatedly. Sasha then locks in the Bank Statement for the win. Sasha Banks is a three time Women’s Champion. Ric Flair comes out and raises Sasha’s arm. – Kevin DiFrango