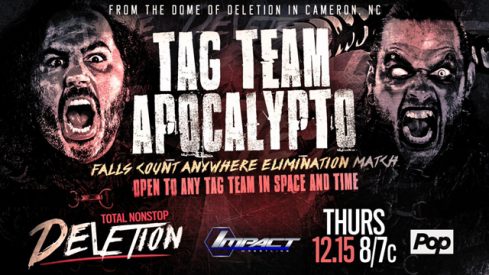 All rights to TNA/Pop TV

Jeremy & Kevin are coming to you on this week’s podcast. Kevin attended a horrific Raw this past Monday, so do they start the show off with that? How about starting by making fun of Chris, who decided to not attend what could be one of the best Smackdown Live’s of the year? Nope, they started off by talking about Total Nonstop Deletion. How wild was it that Crazzy Steve murdered someone during the show? Is Decay dead themselves since Steve got spit out of a volcano and Abyss got Janice in the stomach? How good is King Maxel that even Jeremy doesn’t hate this child? Why didn’t James Storm have Eddie Kingston and Bram by his side? How much is he hoping for residuals from DVD sales of this story from Broken Matt Hardy? How do you go back to the Impact Zone after that? Can’t we all agree that even in this altered reality, the writing is still better than anything from the Impact Zone? Jeremy & Kevin do finally move on to talk about how un-entertaining Raw was. Is it bad news when Braun Strowman body slamming a Christmas tree is the highlight of the show? Why did Nia Jax come out and pick on Sasha Banks for being a “Boss” after Banks just admitted to not being a “Boss” after her loss to Charlotte at Roadblock? Why did Kevin & The Wife stay for the main event? How does attending Raw at the Schottenstein Center differ from going to Nationwide Arena? Is it bad news when Mick Foley forgets which city he is in? Is the WWE going to solve the conundrum of wanting Big Cass to be a singles wrestler while the fans want him to stay with Enzo Amore? Was Kevin more fascinated by the ring crew than the actual product? Jeremy & Kevin wrapped up the show by making fun of Chris for not attending what could be called the bitchiest episode of Smackdown of the year. Did everyone from AJ Styles, The Miz to Natalya sound extra mean on the show? Did Apollo Crews, Baron Corbin and Mojo Rawley have their best showings in their short stints on the main roster so far? You’ll find out the answers to these questions and plenty more when you click on the link below for an extra long edition of the Stunt Granny Audio.