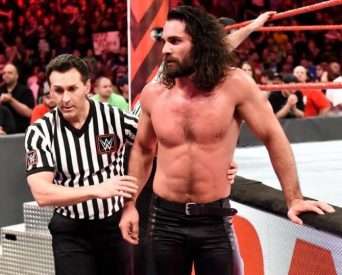 Chris & Kevin had a goal for this show, make it last longer than Seth Rollins in the unique opening to Raw this week. How much easier is it for your hosts to talk for sixty five minutes in comparison to wrestling for that long? Can it be called innovative since WWE couldn’t start every show with a two hour gauntlet match? Did this re-establish Rollins as a singles wrestler? If so, where does he fit in on the Wrestlemania card? Is there a chance now that Braun Strowman could win the Elimination Chamber? Has Roman Reigns been cooled off on TV? Do Elias or The Miz even have a shot at winning the EC? When did things start to go so wrong on Smackdown Live? How terrible is Fastlane going to be with Kevin in attendance? How many multi-person matches will be on that card? Is there a chance that Shane McMahon swoops in to the Elimination Chamber to sign Ronda Rousey? Why has the even great SDL women’s roster gone bad? How are the women of Raw doing? Doesn’t it make sense for Mickie James to temporarily team with Alexa Bliss with two other twosomes in their EC match? The guys wrap up the show talking about Jeff Jarrett‘s induction into the WWE Hall of Fame? Can Kevin choke down his disdain of Jarrett to give out some compliments? Find out by clicking the link below!