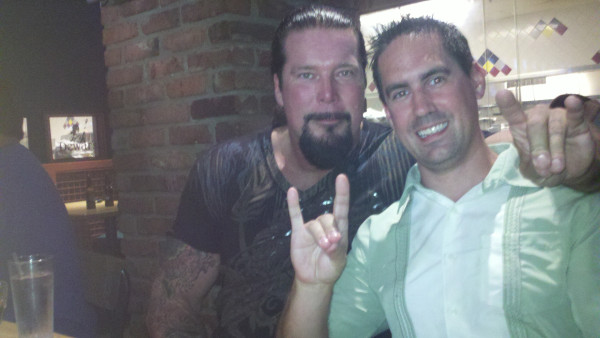 My phone camera sucks more than I thought it did.

OK, to fill in other information that Dan skipped, I’ll pass on describing the venue or our hotel. I will mention the crowd since it’s always good people watching. I’ve seen four very loyal fans there at least the last two years. I could rip on them for a long time but will let that slide to go for my own embarrassment. The son of the group is toothless gentlemen that I mention on Twitter. He got his boxer’s signed by a wrestler that I don’t know. The hard part for me to swallow? He wears a Steelers hat. He gives us a bad name. I’m just saying.

I would like to respond to Dan about his drinking habits. Knowing your limit is something that comes with age. In an older person, they need to know their limit because it wrecks their next day. Rookie old guy drinking mistake my man. I’m glad it didn’t cancel our trip to Melt Bar and Grilled in Lakewood OH. I’d seen it on Diners, Drive-Ins and Dives. It’s a fancy grilled cheese joint. The wait for seating was an hour and thirty minutes. Dan and I went with take out which was still thirty five minutes. It was worth the wait. I got the Municipal Stadium Magic which had fresh local bratwurst, grilled peppers and onions smothered in cheese. It was awesome. It will be stopped at again next year.

When Dan and I were in line, I took some notes on what Kevin Nash was talking about. Dan mentioned the Ricky Morton interview and though I said I’d limit the repeats, one is coming. Nash seemed genuinely pissed at Morton and that he was legitimately going to beat the hell out of him. See the video clip in Dan’s Perspective. Nash talked about how bungled the WCW Invasion angle was, especially since some of the major players didn’t sign with the WWE at the time. He said that they were going to redo the angle in the new upcoming video game for Raw vs Smackdown. Nash mentioned how Rey Mysterio had been unmasked recently when a clip showed of Nash unmasking him on Nitro. He claimed that he had no idea that at the pay per view six days later (I don’t think he mentioned the name but I may be forgetting it.) Rey would unmask for a lengthy time. (It may have been the remainder of his WCW day but he definitely didn’t say that and my memory is faulty.)

Nash thought that it was a problem that wins and losses are not referenced enough at this time. He said it helps give motivation to the character and person performing even when you know that finishes are determined. He also said it helps to make the character want to go out and win against any given opponent even if they lost to them the match before. You’ve got to have the mental rive to always win. When asked about CM Punk, Nash joked (I think) that since the boss (HHH) might need some help that he’d be willing to supply if Punk stepped beyond just flipping his tie. The last thing that he talked about while we were in line (or maybe just getting out of it) when he started talking about his appearance at the royal Rumble earlier this year. He said he heard the crowd erupt after his horn hit while he was still backstage. Nash said that the first thought that popped into his head was “It’s all down hill from here.”

A minor Nash note, when I saw him walk I was in pain. I have no idea how he feels but it can’t be good. He wobbled to the restrooms a couple of times. That could be a good reason he has worked for the WWE. His upper body is still massive. Jeremy felt like I looked like a midget in the picture. Considering I’m giving up a foot plus and probably well over a hundred pounds, I’m not surprised. Like Dan, I had little in the way of expectations for Nash. I stopped watching wrestling in high school and didn’t come back until midway through college. I started back up not long after Nash & Hall had already invaded WCW as the NWO. His biggest time was when I wasn’t watching. I came away impressed. Nash was nice to everyone, told stories and answered any question no matter how ridiculous.

Since Dan brought up talking to Justin Labar, let me be clear (again) as to why I don’t like the guy. Go to the site he works for Wrestlezone.com. Labar has no coverage of Wrestlelution in his little section in the lower right hand side called Chair Shot Reality Videos. Click on the TV reports and they don’t have PWO coverage. Check their forums, still nothing. Editorials, squat. Pay Per View tab since PWO was on iPPV? Guess what, nothing. He could be a great guy for all I know. I have a problem with the fact that I’ve been covering PWO for all of it’s existence (Mostly here but the first season on the Pro Wrestling Torch) and I can’t get mentioned on TV. Granted, it’d probably help if I had connections with people like Kevin Nash. But it still burns me that PWO has given out his website twice a show for nearly a full season and he can’t get change done on his site to help push their product in return. You know what I did after they started pushing his site? I kept as up to date as I could with my reviews. I talked about it more on our Audios. I added it to our Big 11 list (which we need to get back to) when something big happened. I don’t think I’m asking for too much out of Labar.

As a blanket statement, nearly everyone I talked to one on one said they read and appreciated my reviews. Johnny Gargano was the first person we talked to. I asked about his shirt since he had been pimping it on Twitter (@JohnnyGargano). It does look good and I’ll give it a going over at some juncture. He didn’t say much memorable but he did agree to an interview.

After talking to him, PWO had some interviews with the wrestlers in character. Aaron Maguire pimped the Dan Arkham party. Joe Dombrowski started interviewing Portia Perez when Brodie Lee & Marion Fontaine showed up. They all exchanged words, Nash knocked off Lee’s hat (Toronto Maple Leafs), they shoved each other then did a face to face. It was broken after that and Fontaine & Lee were escorted out of the bar.

I got Veda’s attention (because of my stunning good looks) because I complimented her Twitter handle (@itsvedatime). She mentioned that it’s a good pnuemonic device so that people pronounce her name correctly. After talking for a bit, she joined our booth (Sitting beside me because of my shirt. Did you see that in the picture above? It is awesome.) for a while and talked to us about where she grew up (Philly and thankfully not a Flyers fan) and her training with Daizee Haze & Delirious. I won’t go much more into it because she also agreed to an interview and we can cover that information then. She also started following us on Twitter (Another sure sign of my good looks. Just DM me, we can keep it quiet after that).

Dan and I talked to some guys for a short time. Benjamin Boone had remembered me from previous meet and greets the prior years. The biggest of the interactions came with Gregory Iron. We asked him about the plaudits he got from CM Punk. Iron said that he was completely shocked by the whole thing and had no idea that it was coming. He said he wants to capitalize on the fame when he can. Good luck to him because he has worked hard but I have my doubts because of his size. Bryan Castle was more than surprised about me claiming he had “It” factor. The guy was infectious to be around in person. I think it comes across on the show.

I talked to Nicki Valentino for a short amount of time. He used to be an amateur wrestler. Nicki also trained with WWE developmental star Derrick Bateman AKA Michael Hutter who wrestled in PWO for its’ first year. Not long after that, I talked to “M Dogg 20” Matt Cross. He was surprised by the amount of information coming out from former contestants because of the legal agreements that he had to sign to be on the show. I asked if he thought he got booted out to to make an example of “anything can happen”. He agreed and said that a number of times they stopped him in training because he was far more capable in the ring than any of the other contestants. Cross also said that if I talked to any of the other contestants, they’d tell me that he was the most entertaining one in the house even though they showed next to nothing of him. He went on to say that one of the producers said they use two percent of the footage shot on air. As a last comment, I got him to agree to an interview also. I just need to get a hold of him on his website so look for that one very soon. I have given the guy a hard time about not being engaging enough on screen but he was very engaging to talk to in person.

At the event itself (I’ve mentioned it in previous years) but their VIP section can be crashed by anyone because their security is lax to say the least. We had someone join us on stage that had no idea what channel the product is on. From the looks of this person (and brood of children with them) I got the feeling they can’t afford the price of one VIP ticket. Somehow, they got twenty of them. Even if I made fun of the toothless, red neck for getting his boxers signed at the top of the column, at least I know he bought his ticket. – Kevin