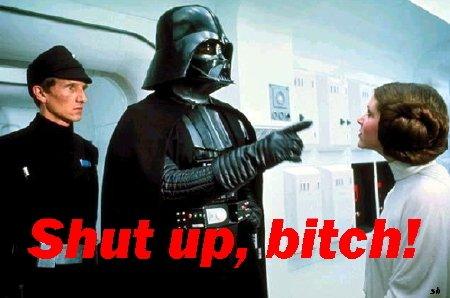 So, my internet and cable was down from about 6 PM until 8 PM. I’m pretty sure Baby Momma Drama talked the entire time. I’m starting to think the guy can’t handle quiet. I really should have pulled a Darth Vader and said “Shut up, bitch”. I’m going to keep on typing and talking though. Probably on the audio show too unless Dusty & I can lure Eric out of retirement. Let’s roll.

I started recording a couple of minutes after 8 but I still got the full opening segment. Damn. Mitchell Cool is very punny to start the show. Big Show is in the ring and getting some good boos. Blocking one Brogue Kick means it can’t ever connect. The crowd buys it though. He makes some real sense by challenging Daniel Bryan. I think that was Aksana with Justin Gabriel. Sure, give all the tag teams a hot broad. They have lots of unused of those on the roster too. Give them TV time. AJ Lee orders Bryan into the match. Little kid cut out goat faces. The WWE will whore out anything. The match is over forty-five seconds so is Big Show really redeeming himself? I missed another chunk of TV time when the cable went out. Show is going to win as soon as I start my “second” recording of Raw. I got nothing on the quality of the match. The commercial took up more time than it did. Kane stops Big Show from going for the WMD.

Brodus Clay and Alberto Del Rio don’t get their entrances. Brodus starts showing off nipple again. Who’s got the screen cap? The kick to the back of the head was so half assed. The arm break that followed wasn’t much better. Cross arm breaker for the win. Punk is talking to Heyman in the locker room. Punk wants to challenge Vince to another match. Santino & Zack Ryder get an entrance before the commercial break.

The Prime Time Players don’t get an entrance. Ryder gets a hot tag way too early. Clash of the Titus for the win. I hear that right, I think. Heath Slater, Jinder Mahal & Drew McIntyre start to dress alike a little bit. The 3MB is their name. # Man Band, I’m guessing.

Dolph Ziggler gets to rag on Ryback. It’s a good point. So confusing how someone can move up, oh that’s right Ryback really isn’t going anywhere. David Otunga sticks out his belly. I love the ego clash. This might be Otunga’s best promo. AJ makes them fight Ryback. Otunga better be taking this loss. Dolph should get in some good offense too. Dolph is selling early but gets the cheap tag. I’ve just been informed that was our fourth replay of the night. Dolph hangs Otunga out to dry. Shell Shock. Paul Heyman gets run down by Vince. Heyman offers the rematch with the stipulation. Vince makes the opponent switch to Heyman. Matt Striker complains to AJ about being attacked by Kane & Bryan. She laughs at his apology. Then puts Striker in a match with Kane.

Antonio Cesaro gets another inset promo. Justin Garbiel gets Felix Baumgartner mentioned. He also got in way more offense than I expected. Cesaro still gets a win. The spring board upper cut didn’t look great for the second time. I think Kidd took a move like that.

Matt Striker is in the ring for Kane‘s entrance. And another replay. I like Striker trying to weasel out of the match. They hug it out. Striker is dumb enough to go for a second hug. Kane wins. The segment was pure filler. Kane starts interviewing Striker. Hilarious.

I FF thru the 6th replay. Kofi Kingston is on Miz TV. My girl and I are arguing about the value of Miz’s suit to Vince’s suit. She thinks baby blue is more of a gay color than if he were wearing pink also. She is confused with the chairs in front of the leather sofas. Miz is running down Kofi pretty well. Kofi attacks. AJ books the match but it’s non-title.

Sheamus is up next against Wade Barrett. Hello Raw Rerun. At least they gave it a week off. The Big Show comes out to signal the commercial break. Big Show distracts Sheamus. Ends up low bridging Sheamus. The people get their Brogue Kick. And a knocked over Big Show. John Cena is still not moving his arm. They’re even shooting him high to distract more.

Eve Torres came out to defend her title against Layla El. The match was solid until the really dumb decision. Layla had her foot on the ropes. I wonder if this guy gets fired after the other missed call. Layla can’t cry. Eve looks really fake. Not sure why these two are at the summit.

Kane and Daniel Bryan talk to each other about their matches. Bryan suggests that Kane has a match with Big Show next week. Vince McMahon does the mic work for Ryback. Feed Me Punk. Cody Rhodes & Damien Sandow are taking on someone other than Rey & Sin Cara because Rey Rey has the flu. Slater & Crew get to invade a staged bar in Nashville. The first logical thing of the night happens, they’re shown the handcuffs. Primo & Epico are bring Rosa Mendes’s hotness to ring side. Termanus by Sandow for the win. It was a very good match. It made Primo & Epico look as good as they have in a long time.

The Miz & Kofi don’t get entrances since they did earlier tonight. JR beating up Kofi in a very nice way. JR even bringing up his old feud with Randy Orton. Kofi better lose in an underhanded way tonight so he can win Wednesday with the way they are hyping him. They’re even doing a good job of selling the Miz as a former champ. Trouble In Paradise. Wow. Didn’t see that coming. I think he’s losing on Wednesday now. Wow, Kingston got Miz bad. No surprise the physician is working on him. Quite a gash on his head.

Vince introduces CM Punk, Ryback & John Cena. The later’s elbow looks more mobile than when he was talking to Vince. I like the fire from Cena but it’s such a chimp line to spout. Then he sells Ryback. His voice starts cracking. Cena’s elbow must be fucked. Ryback is the opponent. Do Punk topple him or does Ryback get an unprecedented push? Shell Shock to close the show. I taped five extra minutes and still didn’t get the full sign off. Yeesh. -Kevin