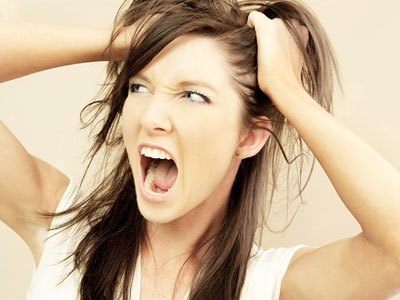 I want to pull out my hair from the majority of results this weekend on both Ring of Honor’s iPPV Final Resolution and WWE’s TLC PPV.  The Shield going over was not a decision that made me want to pull my hair out. I may add to this later.

Oh dear lord, both Mitchell Cool & Jerry Lawler pander to the lowest common denominator by telling us how to download an app for our smart phones. Rey Mysterio is taking on Damien Sandow in a singles match. I guess Rey wants his win. OR they’re keeping this feud going even longer. Neither of those excuses work for me. The first award gets more hype than the match. Booker T joins us. How nice of him. Our first award for most shocking moment of the year. Booker wants us to download their app. Fuck off. I’m not downloading it. I FF thru the award nominees. The Boogeyman comes out. I’m confused.

They did that just so Booker could say he did not just see that. Ugh. Brad Maddox comes prematurely. Get it? Wooka wooka. Kofi gets it for walking on his hands. Eve Torres is taking on Kaitlyn. I like the outfit change for Kaitlyn. Gut Buster for the Kaitlyn win. We get the New Age Outlaws to present an award. The crowd still eats him up. Comeback of the Year. How can Lawler not win that award. People would be heartless if they didn’t give it to him. Wooka wooka. He wins it.

Kofi Kingston takes on Tensai. The crowd is still chanting Albert. Trouble In Paradise. I wasn’t even slacking off on that match. It was that quick. Wade Barrett attacks him from behind. They explain again downloading apps. Fucking idiots.

Vickie Guerrero presents the Kiss of The Year award to AJ Lee and John Cena. Vickie wants her to explain her actions. She goes full on heel. This turn was predictable but it still wasn’t the right call. AJ kisses Dolph Ziggler. Vickie runs off screaming. Dolph acts like he wasn’t kissing back. Um, OK. Shouldn’t they be a couple if she’s a heel? Get Vickie away from him? The Great Khali is coming to the ring with Natalya Neidhart.

David Otunga gets to job to him. Wasn’t watching the match since the Slammy’s are so much more important. Ric Flair is presenting the Superstar of the Year Award. I would be surprised if my girl hadn’t texted me about it. John Cena wins the award. The grown man holding up the U C(an’t) See Me sign needs to be castrated. Or at least snipped. Cena wants to give the award to Flair? So he can sell it to cover debts. CM Punk comes out. Cena sure vamoosed quickly. Ric Flair takes Punk up on his one legged ass kicking scenario. Punk heads to the ring for the commercial break.

Punk attacks him with a crutch. Thumb to the eyes stops Punk. Flair slaps the figure four on Paul Heyman. The crowd goes ape. Flair starts talking when The Shield shows up. The announcers implore him to leave the ring. Another commercial. Daniel Bryan and Kane came down for the saves. It didn’t work. Right before the triple power bomb, Ryback comes down. He holds them long enough for Bryan & Kane to recover. Ryback gets to shake Flair’s hand.

Oh dear lord, Yes, Woo, No trio. Ron Simmons saves us. Damn. Brodus Clay‘s fedora is on the WWE’s Christmas savings list just not quite 90% off. JTG is Clay’s opponent. Cool buries JTG as if he needs more dirt kicked on him. Clay with a splash for the win. Santino Marella & Tensai present for LOL of the year. Tensai gets to suffer more indignity by having a Bugs Bunny sized ice pack on his head. The comedy is oozing from these gentlemen.

The Rock wins that useless award but can’t be there to accept it. Sin Cara is taking on Cody Rhodes. My prediction: The mustache leads to a Cody win. I guess they’re continuing the feud. I’m not excited. JBL pimps Rhodes really well. The mustache is so powerful the lights go back to normal. Zack Ryder gets to present with Layla El. Jesus, enough with the downloading.

The Hash tag of the year goes to #FeedMeMore. Ryback isn’t coming out either. The extra large chair is just stupid. Big Show gets to bitch and brag. Why are Punk and Show sharing a gimmick? Sheamus gives Show props. He offers to shake his hand. Show insults him. Sheamus whacks him with the giant chair. Big Show gets dropped with a Brogue Kick. From all accounts, their matches have been good. They don’t have much else to work with on Smackdown. Cena attacks Ziggler as he goes to cash in the briefcase. Very smart way to extend the feud.  Someone should just be a dick to any MITB winner.

3MB comes out. We get our first Raw with baby face Alberto Del Rio. They’re not doing anything different. How stupid is that? Change something. The Miz comes out.

Dolph Ziggler is pissed after the break. Why did this interrupt a match? Dolph dumps Vickie. She makes a match with herself & Cena vs AJ & Dolph. The Miz has a new person to introduce. He brings out Tommy Dreamer. Drew & Alberto start against each other. Dreamer getting a good reaction. Things break down quickly. Del Rio finally does something new with a suicide dive. We get our first commercial break match. The Miz sells for his team. They’re really letting the Miz get worked over. Even the announcers admit to having checked out of the match.Del Rio gets the hot tag. The crowd doesn’t realize it. Del Rio lets Dreamer in to finish the match. He does so with the DDT. Sheamus comes out for his match because this one didn’t matter. Oh, it’s another stupid award.

Newcomer of the Year is Ryback. That’s a no brainer. He’s out there to wrestle Antonio Cesaro. He made a decent case for himself to be newcomer of the year but he should have done that before the award. Cesaro getting to show off some strength. Sure, he was going to lose. But that’s a nice trinket. Even better he leaves ring side. “Mean” Gene Okerlund, Ricky “The Dragon” Steamboat & Jim Ross are out for an award. They pause awkwardly long so the announcers have to jump in. Match of the Year is the last award.

HHH comes out to accept the award. They are pulling out all of the stops today. Too bad they can’t do this every week. Or with their regular talent base. Chants for the Undertaker. People pander to him because he’s milking the crowd. He confirms that the Undertaker will be back at some point. Tommy Dreamer takes a beating from The Shield. Perfect target for them. Ricardo Rodriguez makes the save for no apparent reason. Referee chase them off. That stopped them? Really? AJ Lee has a ladder brought into the ring. For a commercial break!

She’s full of surprises. We’re to believe that everyone is way more interested in the WWE than their ratings let on. Vickie comes down to berate her. The roles are really confused. Dolph Ziggler is next up. I’m almost caught up as John Cena jumps in the ring. The guys start the match. Ziggler tags in AJ. Vickie starts a cat fight. AJ left ring side so Ziggler got in a cheap shot. Vickie leaves too. Cena locks in the STF. AJ comes out with some black guy. Big E. Langston goes after Cena. I’m confused. -Kevin