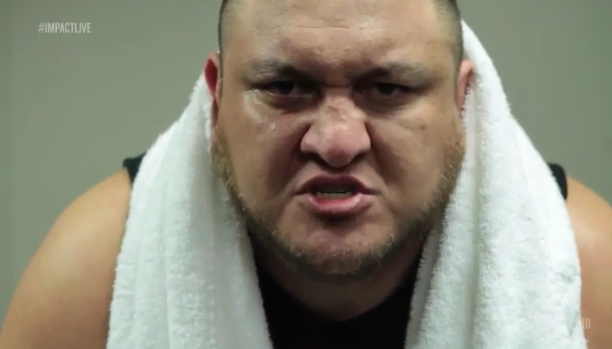 I have decided to part ways with @ImpactWrestling. My very best to them moving forward, and my eternal thanks to the fans.

Somewhere, someone is celebrating like it is 2006. This move is just way too late in Joe’s career to make much of  difference. Sure he will be rightfully employed and be used better than he ever was in TNA but his name has no buzz. His work hasn’t been the same since losing the TNA Title. Yeah it has been that long ago. The best suitors for his services are the obvious choice of ROH but a motivated and refreshed Joe would be a huge draw for New Japan.

It really is shame this didn’t happen sooner in this century. Look at his stint in TNA. Outside of a check what good did that do him?  Now that TNA is pretty much going down in flames Joe decides to jump ship. It is too little too late for a significant run in this country. Joe would have benefited from the structure and well , everything WWE has to offer. Now there is no chance WWE touches him now with his significant weight gain and bland appearance. But mostly they won’t sniff him due to the stink of failure TNA lacquered him with.  -Jeremy