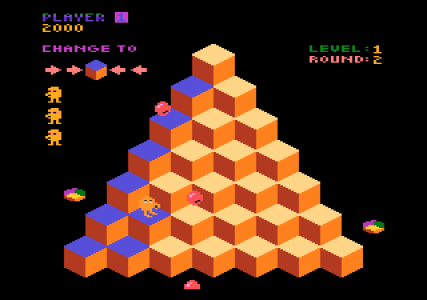 I looked up just ridiculous and a picture of Qbert popped up. From atariage.com

It’s just ridiculous when the WWE sends out text alerts like the one they did today: “The Undertaker is supposedly back stage and he may start the show” or some similar jargon. Look, he’s your employee. Everyone knows it. He doesn’t have super powers. He’s either there or he’s not. The only thing similar I can think of is when NFL teams list someone as “Questionable” when everyone damn well knows that person is starting, especially when it’s a QB.

Naturally the Undertaker did the show. He still isn’t much of a promo guy. Basically, he wants revenge. Good thing we have Paul Heyman to carry another feud. (Next Day Note: The Undertaker easily could have screwed Lesnar over during the “Suplex City” match against Cena or even the main event of Wrestlemania this year since they were in the same venue. Or he could have waited until Lesnar won the belt to take away what is most precious to him as Jeremy suggested to me. Why did his lazy ass wait until now to get revenge like a prick?)

Brie Bella is taking on Charlotte with the whole gaggle of Divas. Sasha Banks, Naomi & Tamina are on the head sets. I can’t help but think every time I see Charlotte with Paige & Becky Lynch what a weird fit Charlotte it. Steam Punk Lynch & Paige are a good match. Charlotte and Brie have a very good match. Charlotte wins with the Figure Eight. I’ve got a real problem already with this push. All of the women were shoved into one segment. If they get another one later, I’ll admit to pulling the alarm too quick. HHH wants Brock Lesnar to stay away from Raw tonight while the Miz distracts him. The Miz gets a match against The Big Show for his indiscretion.

Los Matadores make a reappearance on TV. The Prime Time Players come out to take them on. Darren Young gets to do the selling again this match. Titus O’Neil tossing people around like rag dolls is enjoyable so thank you Mr. Young.  New Day comes out in new track suits. It distracts O’Neil. Back Cracker by one of the unimportant Matadores for the win. (Next Day Note: Since The Usos are still out and it appears as if Erick Rowan has been buried in the swap, we’ll get a continuation of this feud. The WWE really could have had the baby face team chasing the titles longer.)

The only thing worth mentioning is that Big Show won with a middle rope elbow to beat The Miz. The Big Show wants his Intercontinental Title from Ryback. The Big Show could help boost that title. (Next Day Note: As boring as Big Show has been, it is easy for him to pull out the “Giant” card and go on a run. Feed him fresh opponents since he’s a heel now. Ryback is certainly one of them. Possibly Dean Ambrose after he’s done being buddies with Reigns.) Paul Heyman runs into HHH & Stephanie back stage. He promises that he’s just here to offer Brock Lesnar’s retort.

HHH & Stephanie ask the locker room to help them tame Brock Lesnar because there is strength in numbers. Why would they help them exactly? They haven’t been the best bosses. Paul Heyman comes out and just reiterate that Brock Lesnar broke his undefeated streak and that was the most cherished thing the Undertaker had. (Next Day Note: Just assume I’m going to tell you to actually listen to Heyman’s promos rather than me trying to summarize them. It’s an insult to his promos nine out of ten times.) Naturally, this provokes the Undertaker into coming out. Brock Lesnar makes the save. Security comes out to stop the situation. They fail of course. Out comes the locker room. It honestly looks like everyone except for John Cena & Seth Rollins. What a sight. I love the build already. Brad Maddox appearance!

Even after a commercial, Lesnar & Undertaker can’t be separated backstage.

Seth Rollins has some things he needs to get off his chest. Even HHH & Stephanie think he’s being an ass. So the get together for the Authority was just to give a little bit of credibility to this past feud. Again though, why didn’t they wait to pull them apart?

Bray Wyatt & Luke Harper tell the WWE it was a terrible idea to break them up in the first place because it was a much better act that way. If we say that, we’re key board warriors who don’t know about the business.

Luke Harper’s match with Roman Reigns is up next. Dean Ambrose ends up joining Reigns at ring side. I was kind of hoping for a mild update on Harper’s look since he had a new truck shirt. Not much happens before the break. Harper side stepping Reigns is the big move that turns the tide for Harper. He keeps working over Reigns’s injured left arm. Reigns starts a come back holding the arm tenderly. I’m digging that the apron drop kick is being called The Drive By. Reigns and Wyatt have a show down outside. Reigns clocks him. Wyatt attacks after recovering to cause the DQ. Ambrose comes over to make the save. Ambrose gets taken care of quickly. The beat down happens to Reigns. Ambrose recovers enough to break the party up. Why can’t we get a name for his sling shot clothes line now? Please & thanks.

Seth Rollins tells us that we were wrong about him. He makes it clear that his next feud is with Kane. He does a great job of heeling it up and making the crowd boo. He even makes Lilian Garcia declare him still WWE Heavyweight Champion. (Next Day Note: It was weird that he did allow Lesnar to be declared winner as most heels are irked by that part even when they retain the belt. He almost seemed to enjoy it.) John Cena comes out to save us from a feud with Kane. Rollins tries to weasel his way out of the confrontation. Cena backhandedly compliments him by saying that since the WWE Title gets less important, his US Title gets more important. Seth Rollins is having good matches under the radar since they all involve screw ball finishes. (Next Day Note: Which means if he does have a match with Cena, we’ll be getting some great matches.)

Hey there, looks like I was wrong.  Team Bella are on the head sets. Paige & Becky Lynch have a tag team match. They’re taking on Sasha Banks & Naomi. They’ve done a good job of featuring the NXT Divas more in all of these matches so far. You can’t assume people know them. The Divas get another commercial worthy slot. The only time I listen to Nikki is when she finally pipes up and shuts down the dumb story line that the Bellas days are done. If the WWE simply features them more, there will be more time for all the Divas. Lynch meanwhile is taking the beating for her team. Of course moments after Nikki makes a similar point to mine, she has to degrade her sister for losing. One step forward, one step back. Paige comes in and cleans house. Paige gets Naomi in the PTO. Sasha kicks her in the head for the save. Back Stabber into the Bank Statement for the win. Nice of Paige to take the loss.

Lana tells us that Dolph Ziggler is recovering at home. (Next Day Note: Is he selling an injury for his comedy career or a bad WWE movie? If he’s just selling an injury to sell one, he’s the only one on the roster doing it.) Summer Rae shows up in basically the same outfit as Lana. Rusev shows up and calls her “Angel like” and kisses her in front of Lana. He tells Lana she looks tired. No one is looking good in this angle. Ziggler was a dick. Lana is bitchy. Summer Rae is as vapid as ever. Rusev just was a jerk face.

Kevin Owens, Sheamus & Rusev are taking on John Cena, Cesaro & Randy Orton. Everyone on the internet shits a brick that this means the Sheamus vs Randy Orton feud will continue even longer. Cena gets to sell in the early going. They’ve certainly left plenty of time for this thing to go long. Cesaro is getting hurt at the break. Dumb commercials are topped by the dumbest, another free month of the WWE Network. How many people do you think haven’t heard about this thing? Heel teams should argue more. Sheamus chicken fights with Owens. He ends up double axe handling him then leaves ring side. Owens cuts off Cesaro but realizes he’s got no partners. Owens slap tags Rusev when he finally gets back on the apron. They argue. Owens super kicks Rusev. Cesaro finally recovers. Orton gets the tag. I could handle a Rusev vs Orton feud. Orton starting to use the Exploder suplex more. Rusev blocks the RKO and kicks Orton. Lana comes marching down to the ring. She takes off the heels and attacks Summer. Lana quickly wins and tells Summer not to touch her again. AA into a Cesaro Swing into a catapult into an RKO. Orton is like a live video game at this point with all of the RKOs they come up with. – Kevin