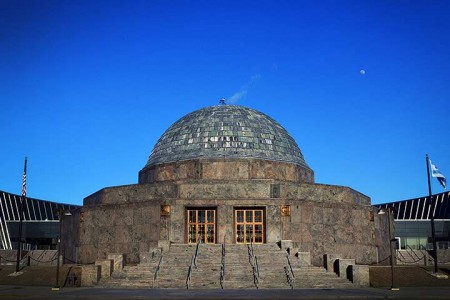 The Adler Planetarium in Chicago. Saved from citypass.com

(Next Day Note: Ernest Grunsfeld Jr. designed the Adler Planetarium. It is designed in the Art Deco style. The Beaux Arts movement isn’t the only one that started in France. It’s a much later time from starting before World War I. Grunsfeld designed the planetarium in 1928 after WWI. He covers two of the three needed prerequisites for the Art Deco style – bold colors (check), geometric shapes (check) and ornamentation (Not so much. Closer to a Modern stripped down feel).  Architecture Lesson done.)

The WWE starts off with a video package. Shane McMahon hits the ring. Speaks the mind of “the fans” about Vince losing his touch with reality. He says that all of the back stabbing stops. People being yanked from pushes for no reason. No more Authority tactics. Vince McMahon just loves being called an “Asshole.” Why are these idiots chanting for “CM Punk?” Shane was rocking some serious plaid pants. Vince smashes the picture of them going to their first. He tells Shane that his grand children can look up to Vince after Shane’s failure at Wrestlemania. Vince orders goons to remove Shane from the ring. Shane wants no part of being led. Shane beats up the three security guards. If anyone thinks that Shane won’t be in the match still, I can’t help them.

Kevin Owens is taking on Neville. Owens started the match using power to get the upper hand. Neville speeds the match up. His come back gets cut short when Owens tossing him into the steps. Owens connects with a nasty suplex. Neville catches him charging in with an enziguri. Neville connects with a Shot Star Press onto Owens outside. Neville does a standing version in the ring. Neville gets kicked charging in. Neville rolls out of the way of an Owens moonsault. Neville connects with a middle rope twist forward splash. Owens rolls him up for a cheap win. Neville complains about Owens holding the tights. Owens assaults Neville from behind. He is ready to power bomb Neville on the apron when Sami Zayn‘s music hits. He makes the save and goes right after Owens. Zayn could be having a huge Wrestlemania weekend.

Zack Ryder and Dolph Ziggler are talking about protein when Stephanie McMahon shows up. Steph mocks Ryder. Dolph had to take down a tweet earlier today about the Authority. Stephanie reminds us that Undertaker will destroy Shane. She gives him a match against three members of the League of Nations. Why is he being made important?

They try to get me to watch Total Divas. Brie Bella is taking on Summer Rae. Didn’t Summer win a match recently then never had it followed up on? Is my memory that fuzzy now? Brie Mode happens entirely too quickly. Summer dodges a cross body. Lana comes out. Summer Rae rolls up Brie poorly and wins. Lana comes into the ring, kicks Brie and gives her an X Factor.

Dean Ambrose is out to talk. He says that the plans for Wrestlemania are going to be messed with when he wins on Saturday night. Ambrose is kind of rambling. He’s going to be a champion these people deserve. HHH is going to bring Dean back into reality. The championship is going to stay with him as long as he wants it to. Ambrose is going to stand on the announce desk and show off the championship. HHH tells Ambrose that he’s a pot hole. Dean would rather be delusional than whatever HHH is. HHH is driven which is what the results show. Ambrose invites HHH into the ring. HHH gives Ambrose a match against Bray Wyatt tonight.

Dolph Ziggler is taking on King Barrett, Rusev and Summer. The argument between Byron Saxton and JBL about Ziggler’s motives is cringe inducing. Saxton is just embarrassing rooting for Ziggler. Barrett takes the first pin fall. Ziggler tries to fight off Sheamus & Rusev but can’t. Brogue Kick for the Sheamus pin fall.

Becky Lynch gets impatient Sasha Banks. Sasha is still pissed about how the last two matches have ended. They tell us that the Divas Title is going to be in a triple threat at Wrestlemania. Awesome. Lynch deserves it and her speech in this promo was a prime example. She’s walked a fine line with being a goof ball but being serious too. Banks is good too but she hasn’t had as much time on WWE TV to get her character across. I hope she gets some solo spots soon.

Becky Lynch & Sasha Banks are taking on Naomi & Tamina. The heels take control early. Well, that was a quick early hot tag to Sasha. A quick win against Bank Statement tap out win. Charlotte takes out Banks from behind. She then catches Lynch.

R Truth is now having to chase Goldust to be his partner. Mark Henry gets to admit he’s fat. Oh, he only declared that he loved Chicago while leaving with a deep dish pizza? So they implied a fat joke. Close enough, right?

New Day tells us that their reign has been 197 days. Big E got an embarrassing tattoo on his hind quarter. Y2AJ has a shirt already which Chris Jericho is wearing. So is AJ Styles. Kofi Kingston & Big E are wrestling as per normal. Y2AJ is in control at the break. Jericho is taking a beating when we get back. Jericho enziguris Kofi to get the hot tag to Styles. He almost gets a pin after a spring board reverse DDT. Big E makes a blind tag. He catches Styles going for the fore arm. Big Ending is broken up by Jericho. Kofi & Jericho square off. Jericho gets the jump early. He ends up injured. Kofi is down. Styles connects witha  spring board 450. Big E pulls Kofi out of the ring. I stopped trying to keep up. The important part was Jericho applying the Walls of Jericho on Kofi. Woods tried to help him but Styles took him out. Big E took out Styles. Big E gets in the ring. Jericho fights but loses to Big E’s power. Big Ending for the win. Styles is helping up Jericho when he gives Styles a Code Breaker. He delivers two more. I had an odd feeling this would happen when they announced the match for this week. It now officially has the feel of last year’s angle with Orton. This detour worked better for me though.

Renee Young asks Chris Jericho why he did what he did. He was pissed that the crowd was chanting for AJ Styles. He’s somehow going to make the crowd stop rooting for Styles.

Kalisto is taking on Tyler Breeze. He’s grown himself a thicker but still manicured beard. Breeze super kicks Kalisto as he jumps off the ropes. Kalisto rolls through into a head kick. Salida Del Sol from the corner for the win. I like the idea of a squash match for Kalisto. I just wish the match had a little more time. Like a minute or two.

Jojo gets to interview Kalisto. He is pumped about being at Wrestlemania. Ryback enters the picture. He gives us a parallel about comic book heroes and Kalisto. Ryback also tells him to go on as a singles wrestler.

Heath Slater of has a microphone. All I remember about this promo is the “Axe Man Chop” from Curtis Axel that ended it. Ryback takes over with his power. Axel seizes a short opportunity to attack Ryback. Shellshock for another win.

Stephanie wonders “What if Shane wins?” Vince tells her that he’s got this.

Dean Ambrose gets set to take on Bray Wyatt. The later gets to say a quick word about taking on Brock Lesnar on Saturday. For the first time tonight, I type the words not much happens before the commercial break. Wyatt connects with a turn around clothes line while Ambrose was going for the Lunatic Lariat. That looked awesome. Wyatt no sells a suicide dive. Ambrose gets urinogied onto the barrier. Ambrose gets an opening. The lights go out.  Braun Strowman, Luke Harper & Erick Rowan hit the ring. The beat down is finished off with a Sister Abigail which I suppose means a DQ win for Ambrose. HHH comes out. Wyatt postures andglides his hand over the WWE Title but has everyone back down. HHH sets up the announce table to attack Ambrose again. It allows Ambrose to recover and hit the Dirty Deeds DDT on HHH. Finish. – Kevin