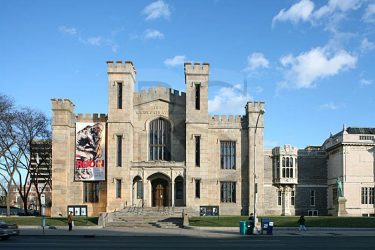 (Architecture Lesson: The Wadsworth Atheneum is labeled as Gothic Revival which isn’t quite accurate to me. While one may think of castles when the term Gothic is used, most buildings of that time period that are studied are churches which had a much lighter but still heavy look to them. Most of the movements I’ve talked about are close to repeating the elements of the past elements without much change. The style used by Alexander Jackson Davis & Ithiel Town has an almost “Modern” (The Modern movement started in the early 1900s. This building was built by 1844 so it is too early to use that term.) take to it in that is simplified down to more basic shapes while still keeping the verticality and dynamics of the Gothic style. The “Castle” part of the Atheneum has been added to since it’s construction but I can highlight those styles of architecture another time.)

The WWE starts us off with Shane McMahon who still is happy with his response. Stephanie McMahon interrupts him. She is having a statue erected in Hartford because of her greatness. This feud still seems super manufactured. Does anyone have definitive proof that he’s the one behind the recent string of good shows? I haven’t seen such news. It does help that the Authority isn’t around, but wouldn’t they have debuted the same NXT Superstars? Couldn’t the Authority turn into a moderate baby face similar to Shane with everyone still disliking the champion? Shane has Stephanie removed from the ring. The gist of the skit was to tell us that Vince determines who runs Raw at Payback. The shows could still be fresh and new under the Authority. Doesn’t seem like a good plan to me at this point though.

AJ Styles came out at the end of the segment to take on Sheamus after the break. Sheamus’s beard is fairly impressive when not in braids. Byron Saxton andn JBL are still doing the dance about whether Styles orchestrated the attacks by Karl Anderson & Luke Gallows. The first break is when Sheamus takes over after a 50/50 beginning by tossing Styles into the steps. Sheamus gives Styles two big back breakers. Styles dodges a charging Sheamus who runs into the ring post. JBL actually making a good point by pointing out that Sheamus and Roman Reigns have a similar styles of brute force offense that Styles will need to deal with. Styles uses his speed to gain the advantage. Styles attacks Sheamus’s injured shoulder. Sheamus pushes Styles into the turn buckles. He follows with a power slam. Styles gets in a Pele Kick to gain another opening. Sheamus gets out of a Styles Clash. Sheamus knocks him down with a clothes line. Sheamus applies the Cloverleaf but Styles fights his way to the ropes. Sheamus goes for a Brogue Kick with Styles on the apron. Styles dodges and Sheamus crotches himself. Phenomenal Forearm for the win. Karl Anderson & Luke Gallows come out and clap for Styles.

The Usos are back stage with Roman Reigns. They tell him they have his back. Reigns tells them the same thing.

New Day comes out to gloat about their tournament going well. The Vaudevillains interrupt. Aiden English is ready to party like it’s 1899. Simon Gotch is ready to stand atop the WWE…Enzo Amore & Big Cass come out. This opening is destroying. Cass tells the VV they’re S-A-W-F-T.  Xavier Woods is pumped about the tension. New Day is happy that they’ll still be champs after Payback.

Karl Anderson & Luke Gallows come out of a locker room labeled “AJ Styles” which is “proof that they are working together.” Knowing the WWE, you always go the swerve direction. The Usos are already in the ring. Anderson & Gallows get an entrance. Gallows is the first with a big move, a clothes line that inside outs Jey. Anderson & Gallows start working over the injured shoulder. The announcers are doing a good job of selling Anderson & Gallows. Jey gets tossed into the barricade for the commercial. Jimmy gets the hot tag. He gets to work over Anderson. He low bridges a charging Gallows. Anderson catches him with a clothes line. They finish Jimmy off with the Magic Killer. Anderson & Gallows continue beating on the Usos after the match. Reigns takes Anderson on the floor and Gallows in the ring. People booing him helping the Usos is so weird. Plus, as the announcers pointed out, that was mostly a long beat down of an impressive tag team.

AJ Styles is being interviewed when Karl Anderson & Luke Gallows tell Styles they got his back. Styles accepts their unconditional love. I mean, if this isn’t a swerve, it’ll be a surprise.

Rusev is accompanied by Lana without much of an explanation. Sami Zayn is his opponent. Rusev gets the upper hand. Michael Cole acknowledges the NXT Title changing hands to Samoa Joe but doesn’t use Finn Balor’s name. I see what you did there. Zayn catches Rusev with a moonsault on the outside. Zayn eats a boot to the head for another match long enough to deserve a commercial. Zayn fires back with a clothes line. Zayn hits a top rope cross body for a two count. Rusev with a fall away slam to change momentum. Rusev counters an arm drag attempt into a super kick. Zayn slips out of an Accolade attempt. He rolls up Rusev for the win. Lana freaks out and tosses her shoes Zayn. Kevin Owens attacks Zayn on the ramp as he celebrates.

Renee Young interviews Apollo Crews. She wants to know how he’s going to stand out. Stardust is his opponent who appears. Crews tells Stardust that his dad helped him a lot and came up with the name. That non-smoking commercial with Titus O’Neil and Dolph Ziggler is terrible at best. Stardust catches Crews with a neck breaker coming back into the ring. Crews is getting serious treatment on his standing moonsault. Toss Up Power Bomb for the win. They are giving Crews victories over some old names that haven’t been names in a while.

Dean Ambrose complains about being jumped by Chris Jericho last week. After insulting him for a while, he invites Jericho out. Jericho answers the call. Jericho isn’t fighting in a dump like this. Jericho wins matches and elevates all of his opponents. This line of logic cracks me up. (Next Day Note: It cracks me up because Jericho just can’t provide either of those services any more because he’s slowed down in the ring and his numerous losses to everyone not named AJ Styles.) Jericho wants Ambrose to kiss his boots. Jericho wants an apology for stealing The Highlight Reel. Ambrose is sorry Jericho paid that much for those bad shoes. He keeps on insulting him in that manner. Ambrose attacks Jericho. Ambrose clears off the announcer table except for one monitor because he needs to fall on it later. Jericho slaps on the Walls of Jericho on the table.

Natalya gets to beat enhancement talent Emma. Charlotte, with Ric Flair, decides to join the festivities. Charlotte joins the booth. Emma gains control early in the match. The crowd wants Sasha. They don’t get her but they do get a quick tap out to the Sharp Shooter. The WWE does a nice retrospective on Joanie “Chyna” Laurer.

Dolph Ziggler attacks Baron Corbin from behind just as Corbin had done to Ziggler. (Next Day Note: Boy did that sentence look terrible last night into this morning.)

I’m already over the improved Miz with Maryse. Cesaro interrupts him. He gets to make fun of the Miz’s bad acting while doing some of his own. As Miz retreats from the fight, Cesaro pulls him back in for a Super Uppercut. Maryse saves him from the swing by jumping on him.

Roman Reigns is set to take on Alberto Del Rio in the main event. No surprise that this match gets a commercial too. Reigns running into the post is what turns things in Del Rio’s favor. Del Rio doesn’t follow up a DDT well. He pays for it with a pair of clothes lines. Reigns Drive By’s Del Rio back first into the post. Damn that looked rough. Del Rio recovers first by crotching Reigns on his way back into the ring. Reigns doesn’t fall for the World’s Dumbest Move. Reigns’s response is a Superman Punch. Karl Anderson & Luke Gallows show up. Del Rio rolls up Reigns but he kicks out. Del Rio goes for a clothes line and misses. Reigns Spears Del Rio for the win. Anderson & Gallows attack. AJ Styles comes down and gets them off of Reigns. They leave then Reigns spears Styles. Gallows then Anderson rejoin but get beat individually by Reigns. Styles catches Reigns with the Phenomenal Forearm to end the exchange. The mystery continues! I hope we can get Scooby Doo & the Gang on the job. – Kevin