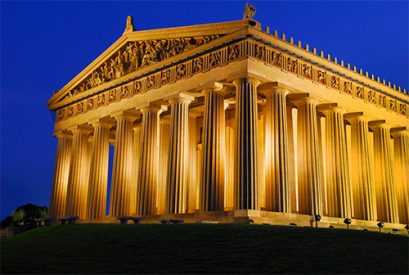 The Parthenon, a full sized replica of the one in Athens Greece, in Nashville. Saved from nashville.org.

The WWE starts us off with a recap of the Kurt Angle saga. Dean Ambrose is the first to hit the ring. We get another recap because we all forgot what happened last week. He wants the Miz to come out because he still wants a piece of him and the “Miztourage.” Seth Rollins comes out instead. He wonders if Ambrose can get over Rollins stabbing him in the back. Rollins tells him that he’s sorry. Ambrose still can’t trust him. Rollins offers to let Ambrose hit him with a chair. Ambrose doesn’t take him up on it. The Miz and the “Tourage” come out. He makes fun of Ambrose & Rollins for being sappy. They end up attacking. Rollins gets the worst of it by taking a Skull Crushing Finale into a chair.

Bayley is taking on Alexa Bliss again. Nothing happens in the match before Nia Jax comes out. They go to commercial. Sasha Banks will get her big entrance after the it. Bayley is going good until the action spills outside. Jax stops Bayley from chasing Bliss. Banks attacks Jax. Bayley To Belly for the win.

Kurt Angle is having second thoughts. Corey Graves tells Angle that the news will get out in this day and age. Which is why it hasn’t come out yet, right?

Titus O’Neil is giving pep talks to Akira Tozawa and Apollo Crews. Ariya Daivari tells Tozawa that he has no honor. Daivari wants to finish the business he started last week.

Brian Kendrick & a freshly shaven Drew Gulak are taking on Mustafa Ali & Jack Gallagher. The announcers have to inform us of everything that happened on 205 Live since they know the majority of viewers of Raw don’t watch the show. Gallagher head butts Kendrick. Ali gets the hot tag. 450 Splash by Ali for the win.

Enzo Amore is doing bad but he’s got the 9 PM time slot so he can’t feel too bad. Amore is still mad at Big Cass. He end sup showing the footage of Cass getting his ass kicked by Big Show last week. Amore says he wouldn’t have run off like Cass did. Cass comes out. His biggest moment was accusing Graves of the problems. How else would events have unfolded between him and Amore? Was he going to fake the attacks for an infinite amount of time? Was Cass going to break it off amicably? Big Show comes out for a match against Cass.They brawl on the outside. Cass gets the upper hand and runs Show into the ring post back first twice. Cass continues to kick Show in the ribs. Enzo runs in and gets a Big Boot.

Roman Reigns is warming up so he needs to be interviewed. Joe’s wins are in the past, just like his win over The Undertaker. It’s his “Yard.”

Elias Samson still is in a feud with Finn Balor. It’s bizarre that Michael Cole defends Samson’s singing. Samson surprises me with a sit down power bomb that gets a near fall. Balor takes control soon thereafter though. Balor drop kicks Samson into the barricade. Balor plays to the crowd. Samson grabs his guitar and hits Balor’s shoulder with it for a DQ loss. A chunk of it breaks off and cuts his head. Bray Wyatt has moved back to Balor. Wyatt lives for pain. He’s going to enjoy destroying Balor. I have no idea why they did that promo then. Samson just had a biggish moment. Let him shine even if he is ultimately losing this mini-feud with Balor.

Bayley & Sasha Banks want Kurt Angle to decide who is taking on Alexa Bliss next. They will face each other for that right.

The Revival is ready to attack The Hardyz again. They want respect.

Akira Tozawa comes out with Titus O’Neil. Ariya Daivari doesn’t get an entrance but does get to point to an Iranian wrestling gold medalist. Daivari ends up working over Tozawa’s shoulder that was injured last week. Tozawa makes a come back but is slowed by the shoulder. Arm breaker by Daivari only gets a two count. O’Neil talks the ref into calling a stoppage to the match. Tozawa tells O’Neil that he never quits.

Kurt Angle makes the announcement at 10 PM. He alludes to his drug use but doesn’t say it outright. He was a daddy to his college girlfriend. Jason Jordan is the reveal. Like everyone predicted. Boo. How does this reflect badly on Angle? American Alpha officially toast.

The Hardy Boyz take no time to attack the Revival. Dash Wilder is barely in the ring when Scott Dawson checks in. Matt Hardy remains in. Jeff Hardy gets in and they double wheel barrow power bomb him. Booker T hasn’t seen this before from them. Even though they used to do it all of the time. Matt ends up selling for the Hardyz.Jeff gets the hot tag and does some of his patented moves. Dawson grabs Jeff’s hair from the apron. He tags in to double team Jeff but it back fires. Hardy drags Wilder out of the ring. Jeff takes advantage. When Jeff goes for the Swanton, Wilder crotches him on the top rope. Dawson makes the pin and grabs the tights for unnecessary reasons.

Samoa Joe isn’t afraid of Roman Reigns. They meet up after a few video packages. They do nothing before a break. Joe starts wearing down Reigns with a neck crank. Reigns fires back with clothes lines. A variety of them. Reigns drops him with a Big Boot. Joe catches Reigns with a big clothes line. Reigns knocks down Joe with a clothes line of his own for another break. Samoan Drop by Reigns gets a two count. Superman Punch for another two count. Braun Strowman shows up. He yanks Joe off the apron. Reigns tries to take the offense to Strowman. Braun tosses Reigns through the ropes into the ring. Samoa Joe is not pleased. Joe also tries and fails. Strowman kicks Reigns ass some more. Joe gives Strowman the Kokina Clutch. Reigns Superman Punches Strowman. Joe is affected and lets go. Strowman power slams both of them. Security tries to talk down Strowman but they can’t. Second power slam to Reigns. Either a 4 Way at Summerslam or Strowman alone. I’ll bank on the 4 Way. – Kevin DiFrango