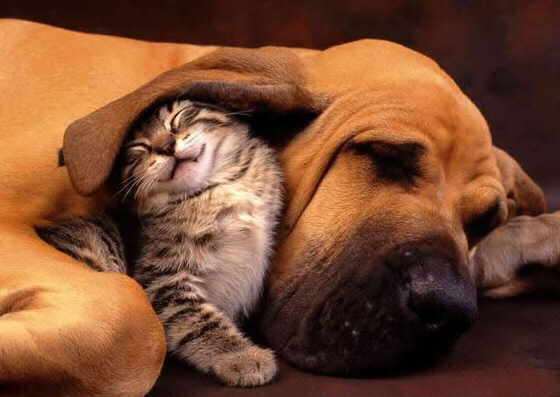 If this isn't cute, fuck you. This picture was under tender loving care.

Dolph Ziggler leads off the pay per view. They already mention Twitter but I’m in no shape to handle a drinking game. I had 4 Thristy Dog 12 Dogs of Christmas Ales during the Patriots at Broncos game. Zack Ryder takes him on. I may need to walk my dogs at some point so I may not be “Live” all the time. Cayenne is hiking a sleeping bag around the living room right now. Stupid Boxer. Both have new tights on so that’s no give away. Cole Irony count is at 1 since he’s making fun of Ryder for being an underdog. Good match so far. Ziggler’s dropkick ranks up there. Zack with the Huracanrana for a two count. Dolph loses to the Rough Ryder. I’d love to say that Ryder will make the US Title important but I’d be lying. Zack’s dad and Big O get to celebrate. Nice touch. The WWE is finally realizing that wins in someone’s hometown can put them over instead of retard their growth.

Booker T got attacked by Cody Rhodes but it shouldn’t mean much. Primo & Epico get a shot at them. Rosa Mendes is fucking hot. Even if she doesn’t have the biggest booty. I’d love to see Primo & Epico get a little more development time, but in today’;s WWE tag team environment & Bourne’s suspension, I lean towards the heel’s win. Kofi got a serious hot tag. Kofi hits Trouble in Paradise to retain. Good choice even of Evan might not be legal. I’m just asking for a 4 team division. Is tht too much to ask? I’m not asking for the past.

Hornswoggle finally admits he’s an adult. Teddy got him an Ebonics dictionary. Hornie kicked him. Randy Orton comes out first. Wade Barrett is #2. I’ve got to think Barrett gets put over with the place on the card. The style of match leads to a fluky decision like Cena versus Sheamus. Sheamus got cooled off after that for nearly a year but he’s a top baby face now.None of these matches so far are leading up to an epic finish.They’ve all been good at a minimum though. RKO thru a table gets the victory. I guess Wade isn’t ready to move up the card yet.

Teddy has another segment. Sheamus and Jack Swagger join this one. Boy, they’ve got nothings for Swagger or Sheaums. Poor Sheamus since he’s further up the food chain. Even though that match was just booked, we get Beth Phoenix against Kelly Kelly next. The dreaded roll up doesn’t work for KK. Beth Phoenix wins after an electric chair. Alicia Fox or bust right now for the WWE.

The Miz and Alberto Del Rio make sure they have their stories straight. Del Rio keeps having his very large flaws pointed out. Miz needs to drop that coat. It’s awful. Booker gets jumped from behind by Cody Rhodes. The WWE, hopefully, realizes this feud can use some more simmering.

HHH versus Kevin Nash in a sledgehammer match is next on the card. Good choice to table Rhodes & Booker. This match doesn’t look like it’s going to keep a long term match. Personal grudge matches should be shorter with more venom. HHH starts working on Nash’s knees. Figure Four thru the ladder for HHH. Nice touch. Nash takes over shortly after. Sling shot into a bridged chair brings a slow spot. Trips is the first t climb the ladder but Nash stops him. Choke slam by Nash who goes outside. He grabs a table. Seems dumb to me. They fight at the top of the ladder. HHH uses the sledgehammer to knock him thru said table. Told you it was dumb. Trips works him over. A Clique symbol then a sledgehammer to the skull wins it for HHH. He needs the win if he’s going to take on Undertaker again.

Punk gets interviewed by Mr. Douche Matt Striker. Punk is mad about that Johnny Wooden GM hasn’t given him his Slammy yet. Johnny mailed it to him. Jack Swagger versus Sheamus bummed Booker vs. Cody. Good choice. Obvious win here. Cody should get the nod too but he needs more build up.

Big Show cut a promo. Do I need to say more? Please say no. Mark Henry does come out for the match though. Man, no sight of John Cena yet. Is this a WWE experiment to see how many people buy this PPV with a CM Punk main event? Big Show starts tossing chairs inside the ring. Henry just avoids them. Big Show attacks him outside the ring. Wow, a more than a bit surprised that Big Show ends it with a WMD thru a chair for the win. Daniel Bryan cashes in the MITB contract and wins it. Awesome!

Booker T versus Cody Rhodes still happens. Booker gets the better of the offense early. Rhodes takes over. My buddy just alerted me to the fact that Baltimore is losing to San Diego. Oh boy, divided attention now. Cody looks pretty strong with the caveat of attacking Booker earlier. They do replays because they need a time filler. UFC would be airing some short knock out or submission match at this point.

Alberto Del Rio vs The Miz vs CM Punk is the main event. I’m going to get a non-alcoholic beverage. Punk getting a huge reaction. The heels team up against Punk. Cool rightly pointing out they should make it a one on one match. They’re doing a good job of doing typical spots for a TLC match with a twist earlier on. Double reverse on the sliding drop kick by Punk leading to the head kick is a good example. High knee by Punk on Miz off of the ring barrier. Punk brings the super big ladder into the ring but they’ve got 10 more minutes in this match. Punk was handcuffed to the ladder by Ricardo Rodriguez. He can pull it down easily. Or Punk can break the ladder. San Diego 31-Baltimore 7. Awesome even more. Del Rio with a front enziguri to Punk who falls through a table. Nice visual.cDel Rio takes out Miz with the cross arm breaker through the ladder. Nice touch of tossing some chairs against Punk. Cross arm breaker through the chair on Punk. Del Rio gets crotched by Miz & Punk. 10:41 so things are wrapping up. Ricardo takes the worst bump of the night. Miz & Punk team up again for a ladder tipping. Miz handcuffs Punk to the ring ropes. Miz taunts him so you know it’ll cost him. Punk catches him with a boot upside the head. Punk starts undoing the second rope. Smart move. GTS on Miz allows Punk to grab the belt. The crowd is red (not white) hot for him. Great finishing match. Good pay per view over all. Glad I ordered it. -Kevin