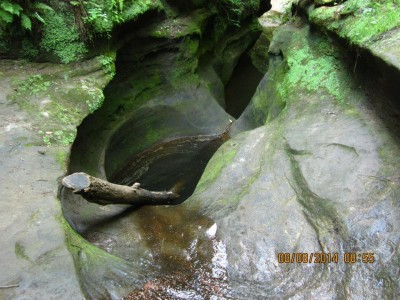 The Lady and I went down to Hocking Hills for her birthday. We got to do some fun hiking and got to see things like Devil’s Bathtub above. All from water erosion. Cool stuff. That did make me come back to a DVR full of wrestling. I hadn’t finished ROH from last week yet. Impact Wrestling was on there. Right now, Smackdown is on. Here’s my synopsis of all three.

Ring of Honor finally had a new television after five consecutive weeks of repeats after crowning Michael Elgin their new Champion. The entire show was taken up by the “Golden Gauntlet” which starts with two people and the winner advances to face a fresh opponent. Even more than the Royal Rumble, this is really bad for the people that start. The last entrant, Cedric Alexander was the final entrant and winner. Alexander has done a good job of stepping up after splitting with Caprice Coleman. He is the younger gentleman with loads of potential that is starting to pay off. He just beat Roderick Strong in a grudge match with the entire “Decade” faction. Alexander wins a title match against Michael Elgin, who finally made an appearance and motioned to Alexander that it was his belt to keep. That isn’t enough Elgin for my taste even if I like Alexander challenging him.

Impact Wrestling was built around Dixie Carter getting put through a table by Bully Ray. If you didn’t see the news that TNA themselves told you would happen, it was a “surprise.” I don’t think it helps or hurts TNA. People have seen this stunt before. There’s nothing special about Dixie going through it. Mae Young taking it is news because she was eighty some years old. A middle aged woman who is somewhat attractive doesn’t give you buzz. Her rag tag team of rejects versus stars who are entirely too old except Bully Ray was a foregone conclusion too. Al Snow didn’t do anything special for the match but he did make sense as a choice since he is an agent for them. He didn’t embarrass himself either. Snitsky looked like he hadn’t worked out in months if not years. I still kick myself for seeing something in Ezekiel Jackson. I don’t care to remember what “witty” banter Mike Tenay & Tazz had on the subject. The other big part of the show was Samoa Joe winning the X Division Title again. In my opinion, that’s still no guarantee that the division gets proper attention.

Dean Ambrose and Seth Rollins got even more TV time on Smackdown after being more up front and center on Raw as Chris and I talked about on Stunt Granny #264. Ambrose got to lead off the show with a promo that I didn’t think was as good as most of his stuff. Rollins then came out to get him to spit out the stipulation. Ambrose explained it to make it slightly more palatable. I say that because the way everyone mentioned the hate for The Shield, maybe, just maybe, they’ll have a traditional or equal hate match without a brawl between the baby face and heel factions. Rollins got to beat my boy Dolph Ziggler during the evening in an entertaining match. Rollins ended up costing Ambrose his match against Randy Orton. I was surprised that Ambrose got to give him Dirty Deeds before the interference. Nice little boost for Ambrose. The only other thing worth happening on this show was Paige tapping out NAtalya. They’re giving her a stronger character even in the ring these days. I like Paige more because of it.

As usual, this column is brought to you by the alcoholic beverages I have consumed, 21st Amendment Back in Black IPA and Great Lakes Brewing Lake Erie Monster Double IPA. – Kevin