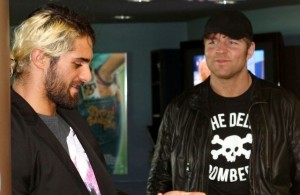 One of the beautiful attributes of professional wrestling is being a witness to an ascending career.  Being on the ground level of a talent rising to the top of their profession is exhilarating, as you get to enjoy the highs and lows, regardless of your status as a charter member or their fan club, or late connoisseur to their ability.  If WWE is involved, however, there lies a dark side to that fandom.  There is an undercurrent of resentment and fear involved when the company decides to show interest in the same character that you cheered from their nascent rise.  Suddenly, that young scrapping up-and-comer morphs into the latest homogenous wrestler strolling down the streets of Stamford.  Instead of being a fresh unique face, he becomes the typical over pushed, over hyped superstar shoved down our throats, regardless of our own enjoyment.  To a certain type of fan, there is nothing more dreaded than seeing a Paul Heyman guy become a Vince McMahon guy.

I’m not that type of fan.  I enjoy when the company gets behind someone I like, because it usually means I get to see them in better situations – more segments, longer matches, and high profile positioning.  At the same time, I have the ability to root for and enjoy multiple characters, regardless of the whims of WWE management.  Nor am I held hostage to the notion that a wrestler should pay an arbitrary set of dues in order to be deemed ready for main event status.  If the person can talk reasonably well (or have a manager talk for him), perform in entertaining matches if placed in the right situation, and has an appeal with enough people, then he’s ready for the main event.  Although finished products are appreciated, it isn’t necessary, and often times not even desired.  Seeing a person grow into a true champion has its own rewards, and there are plenty of characters in WWE who have taken this road, such as The Undertaker, Bret Hart, The Rock, HHH, Kurt Angle, Brock Lesnar, Batista and CM Punk.

This topic is relevant today due to the respective pushes of Roman Reigns and Dean Ambrose.  When the Shield debut, it was widely assumed that Dean Ambrose was the closest to being a main eventer, due to his charisma and unique character.  Roman Reigns, while being deemed to have the most potential, was the most inexperienced, and needed the most protection to look viable.  As time went on, people started to notice and appreciate the perceived potential of Reigns.  He was a modern superstar – athletic ability from a successful college football career, credibility due to Samoan bloodlines, an athletic build with smoldering looks to attract the female fan base, and a cool/calm persona that impressed the males.  In short, he achieved what WWE tried with Randy Orton a decade ago.  Steadily he received more mic and ring time to stand out, including star performances at Survivor Series and the Royal Rumble, and supplanted Ambrose as the leader of the Shield.  And that’s where the “problems” began.

I remember joking with my friends that we couldn’t wait until the fans turned on Reigns because he had the nerve to have the support of management.  Soon after the Shield was disbanded, you started to hear the whispers.  Suddenly, Reigns was limited on the microphone, and unsure of himself on promos.  His ring work was pedestrian, consisting of flashy high spots and little else. He became the latest guy to be pushed too quickly to the top spot, and would suffer.  Somehow, Roman Reigns went from being the next Rock to the Next Ryback.

Keep in mind that during this time he was still getting loud crowd reactions and carrying himself well in the opening and closing segments of Raw. Also remember that WrestleMania is 7 months away and that plenty can happen before the main event is finalized.  Somehow Roman Reigns became the latest example of too much too soon, even though he hasn’t actually been awarded yet.  Meanwhile, Dean Ambrose has morphed into a combination of Rowdy Roddy Piper, Stone Cold Steve Austin and The Joker.  Both casual and internet fans have embraced his loose cannon persona, and appreciate his entertaining antics, even if (or perhaps because of) he doesn’t fit wrestlings typical babyface archetype.  Suddenly, there are whispers that perhaps Dean Ambrose is the one that deserves the crown, and is instead being wasted by Vince McMahon.

Here is my message to the fans of both – calm the hell down and enjoy the ride.  At Summerslam, both Dean Ambrose and Roman Reigns were placed in positions to shine, and both succeed.  Roman Reigns went toe to toe with Randy Orton, who when motivated is probably one of the best professional wrestlers on the damn planet.  By all accounts, he handled himself admirably, and had his best singles match to date.  Meanwhile, Dean Ambrose, along with Seth Rollins, managed the nigh impossible – they had a great lumberjack match, probably one of the best in WWE history.  There is no rule stating that both stars aren’t allowed to be pushed and become top guys. Bret Hart shared the spotlight with Shawn Michaels, who had to share with Diesel and later Psycho Sid, all while the Undertaker loomed in the shadows.  Steve Austin becoming the top star in wrestling didn’t prevent both the Rock and HHH from being pushed, nor did it prevent Mick Foley from somehow becoming World Champion.   John Cena, Batista and Randy Orton were all given opportunity and all succeed to varying degree of success.  There is no right or wrong person to cheer for – the beauty of wrestling is that you are given the ability to choose your own savior.  Instead of choosing between Roman Reigns or Dean Ambrose, be thankful that you have the ability to enjoy Roman Reigns and Dean Ambrose.

Or…….you can just go back to chanting for CM Punk, while complaining about John Cena.  Either way, let the ride happen before you judge the experience. – Shahid