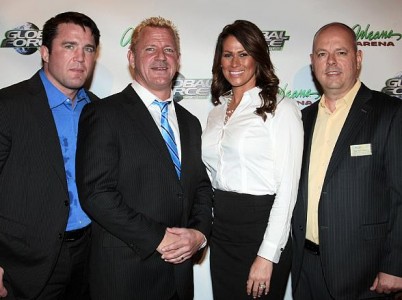 Chris & Kevin were going to start with the WWE but no, Chris had to talk about Global Force Wrestling first. How poorly run is this organization? How can Jeff & Karen Jarrett keep flapping their lips without producing anything? Is that why no one is showing up to minor league baseball fields to watch their handful of shows? Who is headlining these shows? Are all of these problems the reason Toby Keith hasn’t invested in the company yet? Chris & Kevin do move along to the biggest segment of WWE Raw, #GiveDivasaChance. How quickly will this push last? How long will it take to dig out of the hole the Divas are in at the current moment? Is this idea a smart plan? Is there any reason to have faith that this push will be sustained? The guys move along to Battleground preview by discussing which matches really matter on this Sunday’s PPV. According to Chris, there are only two matches. Can Kevin guess them correctly? Is Brock Lesnar going to win on Sunday or is it a foregone conclusion that Seth Rollins will win since all the odds are stacked against him? What’s wrong with Roman Reigns vs Bray Wyatt match? How many more new opponents has John Cena worked with as opposed to Randy Orton? What did Kevin deem the Sippy Time Beer of the show? And how many beers did Chris have before the show started? Find out when you click the link below!