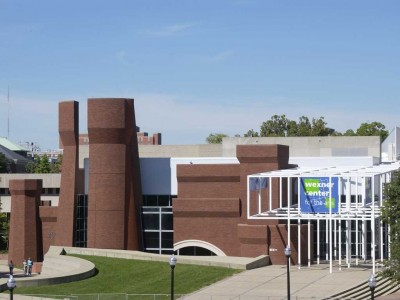 The Wexner Center For The Arts on Ohio State’s Campus. It was designed by Peter Eisenman. Picture saved from academia.edu

Kevin went to Monday Night Raw. Chris sat on his couch and watched. What differences were there in their viewing? How bad was the reception for Brock Lesnar whether in person or on a couch? Was Chris Jericho any better on the microphone this week? Can anyone take him seriously as a contender for the WWE Title? Why did he tuck tail and run when things got rough at th end of the show? Is he injured too? Sasha Banks is clearly injured after not showing up with Naomi & Tamina. How similar is their situation to the one that Alicia Fox & Brie Bella are going through? Was Paige on the show just to promote Total Divas? Did it hurt her character even more than they have in her short two years on the main roster? Is it okay to have terrible logic for Becky Lynch, Ric Flair and Charlotte if they continue to come to the right result? How poorly treated is the League of Nations? Do they have something in common with the Social Outcasts? Is it a good thing that Bray Wyatt threw his hat in the ring for the WWE Championship? Is it possible he ends up feuding with Brock Lesnar? Coming back to the Outcasts, how did Action Bronson piss them off? Will he ever get the chance to be treated like the Miz when he was disrespectful? Chris & Kevin are respectful to the enhancement talent who recently passed, “Iron” Mike Sharpe. Is it conceivable that Kevin show his early career push before getting jobber status? As usual, click on the link below to get all these questions and more answered!