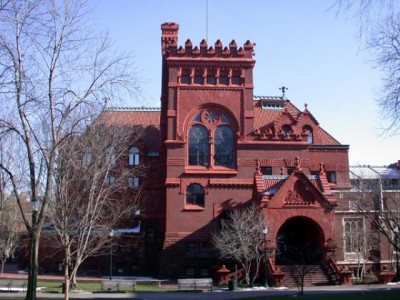 The Fisher Fine Arts Library on the campus of the University of Pennsylvania. Saved from facilities.upenn.edu

(Next Day Note: When Frank Lloyd Wright says “It (The Fisher Fine Arts Library) is a work of art.” then you know it’s an impressive design. I always find a well done asymmetrical building far more impressive than a symmetrical building. You have to offset the visual weight of the tower which is done on the left with the four story apse because of it’s rounded form, on the right you have the entrance piece and clerestory windows in a double dormer along with (not pictured well in this photo) the three story book shelf area which is made out of iron and a glass roof. Impressive work from Frank Furness of Furness, Evans and Company in 1888. It is considered a Venetian Gothic design which did have a habit of using more asymmetrical designs than either the Beaux Arts or the Art Deco styles I have highlighted previously.)

The WWE starts us off a video package. Then Stephanie McMahon. Again, I don’t think she’s doing bad work but she just tunes me out at this point. Roman Reigns keeps it short and sweet. After stopping Steph’s slap, he tells us that he’s the Authority now. He seems to play better off of Stephanie than anyone else.

AJ Styles is taking on Kevin Owens. I sort of agree with JBL that Styles shouldn’t have been distracted. I wait for the day the UFC starts sanctioning people coming out in the middle of matches. Owens is on the winning end of things after the obligatory early break. Owens misses a Cannonball. Styles goes for a head scissors but it gets blocked. Owens connects with a frog splash. Styles kicks out at two. Owens & Styles trade a super kick and Pele Kick before another break. Styles gives Owens a modified Blue Thunder Bomb for a two count. Styles reverses on the top ropes to give Owens a power bomb. Another two count. Chris Jericho comes out chanting “AJ Styles.” Styles reverses into a Calf Crusher but decides to take a swipe at Jericho on the apron. Owens rolls up Styles for the win. Owens brags after the match. Dolph Ziggler can steal the show and beat Owens at Wrestlemania. The Miz comes out and runs down Ziggler. Sami Zayn is the last one to throw his hat in the ring. Owens said he’s going to the Authority for a triple threat match to determine his opponent at Wrestlemania.

The WWE is taking me too seriously about the onsite promos. Dean Ambrose is at a bar. I can’t my eye off the baseball picture in the background that doesn’t involve the Phillies. Terry Funk tells Ambrose that he’s crazy like a fox. He gives Ambrose his chain saw. I mean, there has to be blood in this match now, right?

Kevin Owens gets more TV time with Stephanie. She grants his request. Why did we need that segment? No one else could use that time?

I skipped the Undertaker vs Shane McMahon segment because it’s the right way to hype a special attraction match but it’s also no closer to giving us any motivation for Taker or what Shane plans to do if he wins.

The League of Booty each got short promos. They’re not even hated enough for the crowd to chant “New Day Rocks” as they say “Sucks.” New Day isn’t doing much better. Kofi points out how far Alberto Del Rio has fallen in his WWE career. Ouch. They of course made fun of all four members but nothing that harsh. People love to chant for food in the WWE. (Next Day Note: It was for Booty-Os in this case. CM Punk got at least the ice cream bars for a chant.)

Rusev is taking on Big E in a singles match with everyone at ring side. Since the talking segment was long, nothing of consequence happens before the break. Rusev tossed Big E into the steps to gain control during it. Big E got a momentary opening but Rusev stopped it by putting up his knees during a splash attempt. Big E urinogis a charging Rusev in the corner. Rusev gives a charging Big E a knee to the head. Big E is distracted by King Barrett. Xavier Woods cleabs out Del Rio & Barrett. Rusev goes for the Accolade but Big E powers out with an electric chair. Big E spears Sheamus off the apron. Kofi kicks Rusev in the head. Big Ending for the win. The League of Booty needs an in ring win.

Bray Wyatt gets the fireflies despite the fact that Braun Strowman wants to take Dean Ambrose’s soul. I mean, you want to take out the best baby face and the fans are still with you.

Why is Naomi doing a commercial with Alicia Fox & Natalya? Whatever. Big Show thinks it’s important to win the Andre the Giant Memorial Battle Royal again since everyone who has won has done nothing. The Social Outcasts come out and tell him that he’ll be their biggest victim at Wrestlemania. They start beating down Big Show when Kane‘s music hits. Kane tosses all four of them over the top rope. Show thanks Kane. He goes to the ropes to celebrate. Kane choke slams him off the ropes. At least it’s hype for a match.

Stan Hansen is getting into the WWE Hall of Fame. Congratulations. The WWE always seems to go over board with the number of inductees. They’ve got to run out at some point.

Chris Jericho is taking on Fandango, who indeed is still alive. Fandango gets in a modicum of offense. Just as Jericho is ready to put Fandango in the Walls, AJ Styles comes out chanting “Y2Jackass.” Fandango fails to capitalize. Code Breaker for the win. A little bit of a head scratcher that the heel was the one to overcome the odds. Jericho runs when Styles hits the ring. Styles then challenges him to a match at Wrestlemania. Jericho doesn’t cave in to the demand.

The videos of Shane McMahon training have been the best part of these video montages.

Kevin Owens is the ring announcer for the triple threat match. Stardust is introduced as the first participant. Sin Cara is the second. Owens rips on Zack Ryder for his style. Not one of Owens better lines of logic when defending his actions. This match is a joke so it’s hard to pay attention to. Sami Zayn comes out and starts barking at Owens. The Miz & Dolph Ziggler follow suit. Stardust gets back dropped outside. Owens tosses him into The Miz for the DQ. All of them squabble over who gets to punch Owens more.

Stephanie gets interrupted by Kevin Owens. She makes a match with all six opponents at Wrestlemania. To put a cherry on the whipped cream, she makes it a ladder match. I love Owens but both of his segments for Steph could have been used for someone who needs it. (Next Day Note: I shouldn’t have been annoyed with these segments. The WWE focuses on the match ups well leading into Wrestlemania and both segments got us to Kevin Owens defending the Intercontinental Title. Why Zack Ryder, Sin Cara & Stardust are included is still a mystery to me. Couldn’t they just be in the battle royal?)

HHH picks up Stephanie. Roman Reigns is waiting outside. For some reason, they didn’t see him so it’s a surprise when Reigns yanks him out of the Hummer Limo. HHH creates an opening and hops back in the limo. It takes off.

Instead of having Sasha Banks & Becky Lynch explain themselves, Michael Cole narrates a video package. I was listening to this match between Charlotte & Natalya more than watching it. What I see is good, again. Charlotte wins with Natural Selection. Banks & Lynch did a good job on the head set.

Bubba Ray is taking on R Truth in a singles match. Devon is at ring side. Are they testing the waters with Bubba as a singles wrestler? A Big Boot does in Truth. Wow, not even a Bubba Bomb? Goldust tries to make the save. The Usos make the save. They pull out the table after beating down the Dudleyz. Devon gets put on a table. The Usos take too long playing to the crowd. Bubba makes the save and the Dudleyz leave.

Vince McMahon tells us that the Undertaker has to win or else it’s his last Wrestlemania. Hey, we’ve got some motivation, 13 days before the event. Never too late, right? Right? Another positive note…

Dean Ambrose vs Braun Strowman is the main event. Ambrose got tossed around like a rag doll the last time these two met. This match is going to be a whole lot different. Paul Heyman is on the head set and helping to sell the match with Brock Lesnar. These poor guys get a “This is boring” chant. I know why they’re using Strowman (his size and previous ass kicking already mentioned) but it does make the match quality come down. Ambrose gets himself DQed by using a chair. Ambrose ends up giving Strowman a DDT on a chair. (Next Day Note: I thought they had said this was a street fight to simulate what will happen to Brock Lesnar at WM. I was clearly wrong. Why would you show that the baby face could over come the odds?) – Kevin