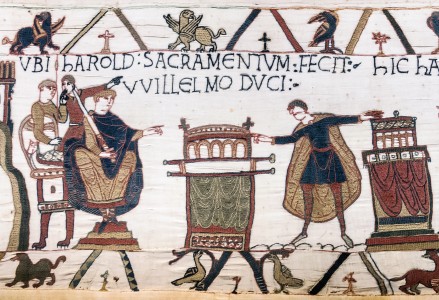 The Bayeux Tapestry saved from en.wikipedia.org

Kevin is joined in the booth by Jeremy & Shahid. Instead of ending with the bad news, they decide to start with it. Will TNA finally fold? Why does Dixie Carter think she can hold onto a majority while also seeking additional investors? Why did TNA a Best of AJ Styles DVD when he’s on WWE TV these days? How much did Styles insult TNA while on Sam Roberts Wrestling Podcast? Is NXT a better wrestling alternative to the WWE than TNA ever was? How many people noticed Matt Hardy at the Charlotte airport on Jeremy’s flight back from Dallas? Jeremy, Kevin & Shahid finally move onto the greener pasture known as the WWE, unlike James Storm. The WWE is shaking things up by bringing in a bunch of new talent. How crazy is it that there are two tag team feuds, Karl Anderson & Doc Gallows vs The Usos and Enzo Amore & Big Cass vs The Dudley Boyz, without even using the WWE Tag Team Champions New Day? The WWE is also introducing the Vaudvillians. Did they translate well from NXT to Smackdown? How well is the WWE even propping up old talents like the Miz with Maryse? How much is a no brainer was that move? Are they doing that with anyone else? What is going to happen when John Cena & Randy Orton come back into the fold? How much are these moves are basic booking? How long can the WWE keep up with making good decisions? How long does this podcast go? Click on the link to find out.