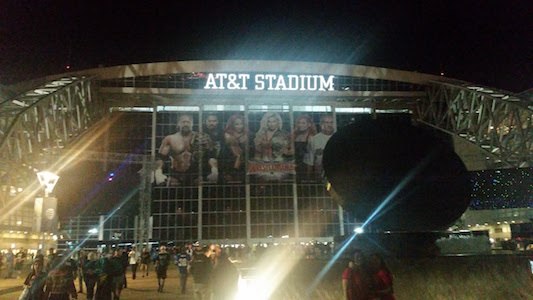 Jeremy & Kevin stayed up into the wee mornings to record this show since Wrestlemania 32 was really long. The guys run through the various differences between this Wrestlemania and those of the past. How was the stadium different? Is AT&T Stadium aka Jerry World all that it is cracked up to be? How did the giant video board at to the matches? How was the lay out of the stadium? Was it more of a distraction than an enhancement to the product? How was Dallas the city different from Detroit, Orlando, Atlanta and New Orleans? Did the record breaking crowd mean more noise? Was there anyone that stood out for a response other than Shawn Michaels, Steve Austin and The Rock? Jeremy & Kevin claimed they wouldn’t do a run down of the matches but then did exactly that. Did they forget the order of the matches? How was the quality of the matches? Did any of their preview predictions come to pass? Did anyone see Zack Ryder winning the IC Title? How is it that AJ Styles lost to Chris Jericho at Wrestlemania but Fandango did not? Which match did they think was the best of the night? How did it look to see Shane McMahon jump off the top of the Hell in a Cell in person? Was the outcome of the main event going to get a blah response no matter who won? Can someone fall asleep in the middle of talking? We hope you don’t fall asleep listening to our adventure in the Big D so click on the link below!