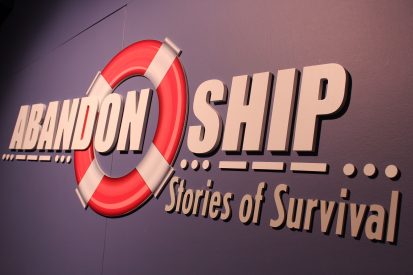 Logo for a part of the Mariner’s Museum and Park in Newport News, VA. Saved from marinersmuseum.org

Chris & Kevin are back at it. It being talking about the more imminent demise of TNA since the last time they talked about it? I mean, it’s got to be bad now that they’re reportedly $3.4 million in debt? And that doesn’t even count toward the personal money Dixie Carter owes Billy Corgan. Was he president in name only? Did the wrestlers in the back want him to purchase the company? The state of Tennessee is wanting some money too. How impressive is it that Carter is clinging to power? Wouldn’t it be great if she put that much effort into making a better product? Could Carter stay in power if she files for bankruptcy? Isn’t that just delaying the inevitable longer? How many times can we talk about how many chances Carter has squandered? Will the TNA Eulogy ever happen with the full Stunt Granny crew? Chris & Kevin move along to happier times in the WWE. They brought back Bill Goldberg for one last match against Brock Lesnar. Will Kevin continue to slander the promo by Goldberg? Does it really matter though since he’ll be watching the PPV? Should Goldberg and Lesnar have an in person show down before (yet to be officially confirmed) Survivor Series? Could it be a problem that Goldberg will have his return match in Toronto? Any chance that it gets booed out of the building like their first confrontation? The guys move along to the other big topic in the WWE, James Ellsworth and the role he, AJ Styles & Dean Ambrose played on Smackdown Live. Are they in holding pattern since they don’t have their own brand PPV until after Survivor Series? Is the WWE dropping the ball on promoting Charlotte vs Sasha Banks in Hell In a Cell? Will it matter if they go on last at the HIAC PPV? How much trickier will it be with the HIAC matches instead of the somewhat standard two? What else is worth talking about other than the Bell Time Beer of the Week? Find out when you click the link below!