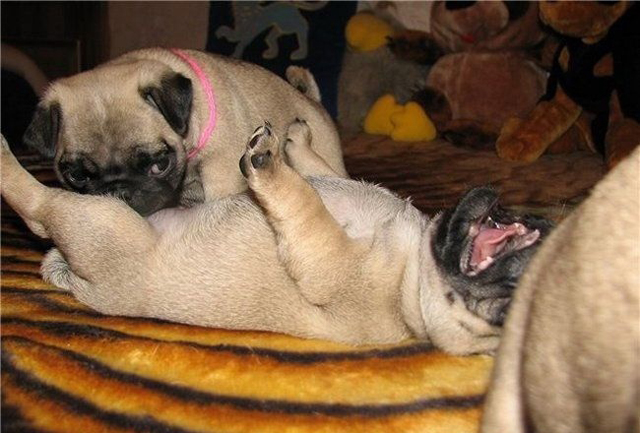 I enjoyed Raw last week. That pug is definitely enjoying something.

I was surprised at how much people disliked Raw last week. I never ended up getting to talk about my thoughts of the show since we talked about the ancillary happenings around the show. If Nash did not pass a physical test, then the WWE had to make a serious adjustment to the storyline. I doubt we get a clean finish between HHH and Punk because they’ve had to speed up this storyline so I’ll wait to see what they pull off. I feel like I need to give the WWE the benefit of the doubt here recently because they have stepped up and given a lot of people chances and bigger pushes. One of these competitors is Zach Ryder, who had a slew of signs last week and got his first video package that had Z! True Long Island Story. They’re also pushing the Divas of Doom and giving the ladies a little more ring time. Sure, the tag team push might just be a fad but again, let’s see them out. Change isn’t going to happen over night.  If I remember anything else, I’ll try to add it into the commentary. Let’s roll, pretty much on time.

After a promo that almost put me to sleep by Del Rio, Bret Hart does get a big response but Cole correctly points out that they’re in Canada. His sunglasses are awful. They’re riding too high on his face. They look like they’re trying to cut out the glare coming off of his forehead. Hart is stumbling all over the place as usual. Illegal Canadians got a chuckle out of me. Cena is playing down to the competition again in the promo department. I’m shocked, all that jockeying set up a tag team match. (That’s sarcasm.) Cody vs. Randy was good on Smackdown. I don’t need to watch it again. Oh, check out of Twitter (@Stuntgranny) for random things like me getting entirely too drunk on a Sunday, waking up at 1 AM then finally Smackdown and doing a review. Not a good day all around. Nothing quite like hitting on a lesbian.

We get a tag team match. Oh, another good thing (I hope) they’re doing is getting Vickie Guerrero a stable. It’d add to the tag team division possibly, too. Riley gets the cheapie to extend the Vickie storyline. Wow, Swagger saw the replay. Glad someone did. The Miz’s shirt is awful. I like Truth dressing up. I’m not sure I liked the content of the promo but I like the shot as they walk to the ring.

Air Boom needs to coordinate their ring entrance better. The hand slap and stare that Miz & Truth did was better. I just noticed the WWE Bizarro World sign. Nice. I’m going to be caught up. Time to change the name of the article.

I just saw on Twitter that Helms likes Miz’s new shirt. It’s just white print with red shadows on black. There is no design to it other than turning the WWE upside down as he did with the mic. Nothing creative or good about it. The end is no big surprise. Miz needed the win. Bourne can get a return victory on Smackdown. Four way match for my boy Dolph at the PPV. Kelly Kelly did better than normal. Nice way to keep her away from beating Natalya a second time.

King pointing out just how charisma-less McGillicutty & Otunga are is another good thing the WWE is doing. They had no comebacks to him that were worthwhile. Sheamus and his Irish yarns get the nod as Lawler’s partner this week. Sheamus rightfully dismantles them.

Cena & Hart against Del Rio & Rodriguez is taking a long time to get started. This comedy match is the mid-main event. Ricardo just did a good job of saving the match with his tag of Del Rio getting his ass kicked. The Cena bit was a whatever tack on.

KK against Vickie coming down the pike. I rewound it but it’s hard to trip on KK’s foot on the botched bulldog. Why was KK wiggling her ass when making the pin. More of a backdrop for the argument. Not the best way to hype the champ. Actually, her kick on Beth did more than the match. Beth has to lose because she’s in her hometown for Night of Champions, right?

Hugh Jackman next week. Maybe our hits will go up now. The HHH video package is making me think twice about my earlier prediction. Mark Henry repeats his promo from Smackdown. At least it’s a good one to repeat. We get another repeat Smackdown moment, the match between Orton and Rhodes. 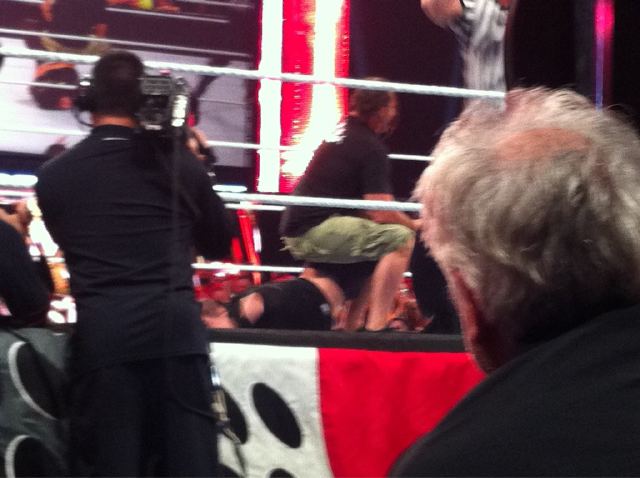 Cole has to explain Rhodes’ baggers. I know you need to spoon feed some information, but hasn’t that been well established by now? They’re doing a good job of making this match different. Henry taunting Orton is fun. More reason to fear him than most people on the roster.

The announcers are really selling Henry. I’m not sure if he loses all his momentum if he loses to Orton. They’ve re-established him well. Orton still distracted which gives Cody a nice little victory on Raw. How much of a bitch is Teddy Long if he doesn’t throw down the hammer on these two for breaking his no contact edict? I am really digging Henry these days.

CM Punk gets to come out second.  In the background of Punk standing on the rope, 3 of the 4 people had “Best In The World” t shirts. Merch machine he is these days. Punk gets to go first. So according to HHH’s line of thinking, Punk’s title reigns don’t mean anything? Good exchange but I’m not buying HHH’s point of view. HHH has to admit that some people are favored. Punk didn’t get crammed down our throats in quite the same way Alberto Del Rio has. I really liked HHH’s closing. I like the ending. Punk delivers, again. And he’s in the main event, not Cena. I’m just saying, there’s more change. Don’t dwell on HHH being in there. -Kevin